BISHKEK (92 News) – A formal session of the 19th meeting of the Council of the Heads of State of Shanghai Cooperation (SCO) has started in Bishkek, Kyrgyzstan.

Kyrgyzstan President Sooronbay Sharipovich Jeenbekov welcomed the PM Khan and also hold group photo with all the members. Imran Khan is representing Pakistan in the moot.

Other leaders of the SCO member and observer states as well as representatives of important international organizations are attending the meeting. 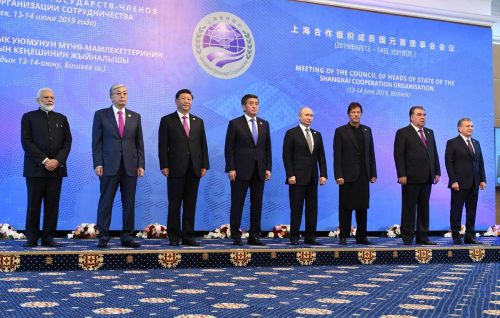 The Council of Heads of State is the highest forum of SCO which considers and defines strategy, prospects and priorities of the Organization. It is pertinent to mention here that the prime minister on Friday has reached the venue to attend SCO session in Bishkek.

Earlier, Pakistan and Kyrgyzstan agreed to strengthen land and air connectivity between the two countries.

A day earlier, Imran Khan held an informal meeting with Russian President Vladimir Putin on the sidelines of the 19th meeting of the Council of the Heads of State of the Shanghai Cooperation Organization (SCO).

They discussed the matters of mutual interest. Both leaders will hold one-on-one meeting on Friday. Meanwhile, Prime Minister Imran Khan gave an interview to the Russian media. He expressed the wish to reduce tension with India and enhance relations with Russia.

He said that Pakistan wants to spend money on public welfare instead of weapons.

Earlier, Prime Minister Imran Khan reached Bishkek, Kyrgyzstan to attend the 19th meeting of the Council of the Heads of State of the Shanghai Cooperation Organization (SCO).