The Carribean side’s opener Deandra Dottin was the star of the show as she smashed Pakistan Women all over the park during her unbeaten 60-ball 90-run knock. She was well supported by Chedean Nation, who scored 50* off just 35 balls.

The only bowler to pick up a wicket for Pakistan was Nashra Sindhu, who gave away just 23 runs in her allotted four overs. Dottin and Chandu dealt everyone else with ease, and helped their side amass a daunting 160-run total for the loss of just two wickets.

In reply, Pakistan Women could only muster 89 runs before losing all their wickets. Captain Bismah Maroof top scored with 38 off 37 balls. She and opener Javeria Khan (19) were the only two batters that contributed in doubles figures.

The rest crumbled against the Calypso Queens’ devastating bowling unit, spearheaded by Shamilia Connel, who finished with figures of 29-3.

The second match of the series will be played at the same venue on Thursday.

A day earlier, in a major step towards ensuring the return of international cricket in Pakistan, the West Indies women’s cricket team arrived in Karachi for three Twenty20 Internationals starting January 31.

The West Indies women’s team, who last played in Pakistan in 2004, will be captained by Merissa Aguilleira and are excited about the tour.

“I’m pleased we can bring back cricket to Pakistan,” experienced Aguilleira said. “Because it’s really important. If we find ourselves in this position, I believe one of the teams would step up and try to help us.”

The West Indian team has been preparing for the Pakistan series in Dubai and will have a quick turnaround after they land in the city before the first match on Thursday.

Aguilleira’s side though is not unduly worried about the conditions they will face. “We have a motto, two words our coach has given us: adapt and overcome. That is what we are trying to do,” said the captain.

“It is really difficult adapting in such quick time, but we are professional cricketers and we are willing and raring to go. We are excited for this tour.”

The three matches have now become more important for both sides, as they have been drawn in the same half of the ICC Women’s T20 World Cup 2020 in Australia.

The West Indies, champions in 2016, are keen to use this as a chance to get to know what they might be up against. “It’s important to take [all] information we can away from Pakistan because they’re a growing team and developing very well,” Aguilleira said. 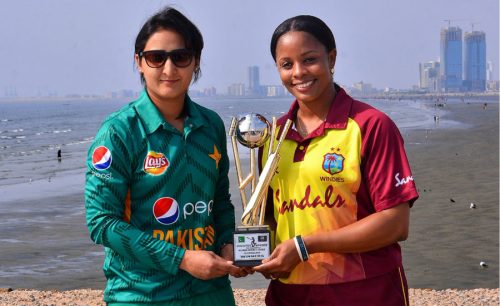 The Pakistan-West Indies women T20 International trophy was unveiled at Sea Vie Beach. On their arrival, the visitors were accorded a rousing welcome by the PCB officials.

The West Indiesare in Pakistan for three Women’s Twenty20 Internationals starting on Thursday, marking the first visit by their team to the country in 15 years, reported the ICC.

The opening game will be followed by matches on February 1 and 3. Both teams will also play a three-match series in Dubai from February 7 to 11.

Excitement is high in the squad led by stand-in captain Merissa Aguilleira, with the players keen to do their bit to bring cricket back to Pakistan.