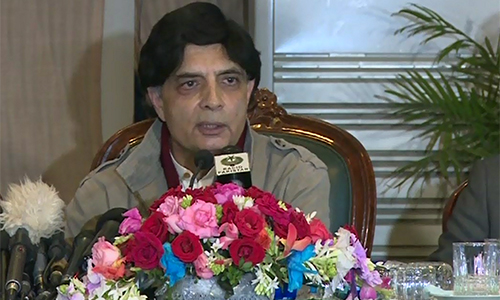 ISLAMABAD (92 News) – Interior Minister Chaudhry Nisar has said that the previous government had recruited 5,000-6,000 people in the National Database and Registration Authority (NADRA) on political basis. Addressing the inaugural ceremony of the Passport Home Delivery on Tuesday, he said that the PTI is a defeated party, which insults a national institution like the NADRA. “The recounting of votes is the job of the Election Commission of Pakistan, not the NADRA.” The minister said that the corrupt would be jailed. “A monitoring committee has been formed to evaluate the performance of the NADRA,” he said. He said that a client-friendly executive centre is being established in the NADRA. “I want to make the provision of public services to citizens easy.” Ch Nisar said that the NADRA’s online system would be available in far-off areas. “The people will get the facility of getting the passport at their doorstep,” he said.