Target website stumbles on Cyber Monday, rivals out of stock 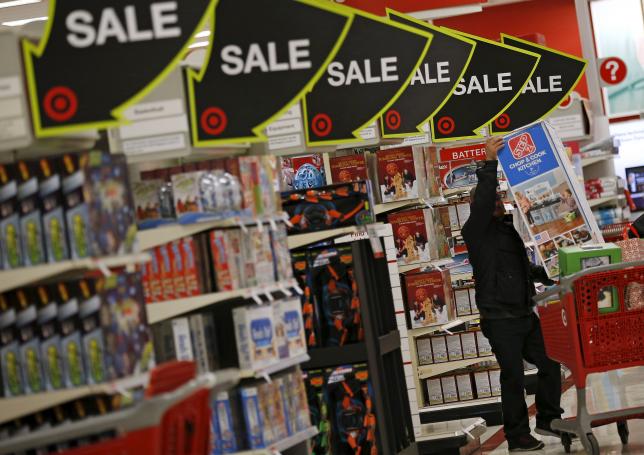 Target website stumbles on Cyber Monday, rivals out of stock

CHICAGO - US shoppers seeking to avoid the holiday crowds at bricks-and-mortar stores and snare deals on Cyber came face-to-face with traffic jams and product sellouts, with some customers of Target Corp forced to wait in a virtual line.

Sales on Cyber Monday, traditionally the busiest day of the year for Internet shopping, were expected to finish up 12 percent from a year earlier at $2.98 billion, according to Adobe Digital Index, part of Adobe Systems Inc, which provides digital marketing and media services to merchants. As of 10 a.m. ET on Monday, sales registered at $490 million.

But 13 out of 100 product views returned an out-of-stock message Monday morning, more than twice the rate on an average day, according to Adobe.

"Consumers are hyped for Cyber Monday, with social buzz more positive than what we saw on Black Friday, but they need to brace themselves for the highest out-of-stock rates of the season so far," said Tamara Gaffney, principal analyst at Adobe Digital Index.

The data underscores the ongoing shift in shopping online, which makes up for slowing spending in stores. But product shortages raise broader concerns about inventory planning by retailers during the most crucial time of the year.

Adobe tracked 80 percent of all online transactions from the top 100 US retailers and said sales are on track to meet its expectation of a record $3 billion by the end of Monday.

Retail stocks including Amazon, Wal-Mart, Target and Macy's Inc fell between 1 and 3 percent on Monday.

On Target's website, www.target.com, some shoppers looking for bargains were greeted with an error message: "So sorry, but high traffic's causing delays. If you wouldn't mind holding, we'll refresh automatically & get things going ASAP."

A Target spokeswoman said that as the website witnesses spikes in traffic it places some guests in a queue, while millions of others shopped on the website. She said Target's volume was already twice as high as its busiest day ever.

Most US retailers like Wal-Mart, Target and Best Buy began offering some of the season's best online deals, which traditionally had been reserved for Cyber Monday, several weeks in advance.

Between Thanksgiving day and Cyber Monday, $11 billion will have been spent online, a 15 percent increase from 2014, Adobe said. Mobile devices, which include smartphones and tablets, drove 28 percent of online sales, Adobe said.

Mastercard, which tracks spending in its card network as well as other forms of payments, said its data also showed a double-digit jump in e-commerce sales from Thanksgiving to Sunday, above its expectations for an 8 percent rise.

IBM has predicted that Cyber Monday online sales would grow by more than 18 percent compared with 2014. IBM said e-commerce sales rose 26 percent on Saturday and Sunday compared with a year earlier. -Reuters