What to expect when you're expecting two feet of snow 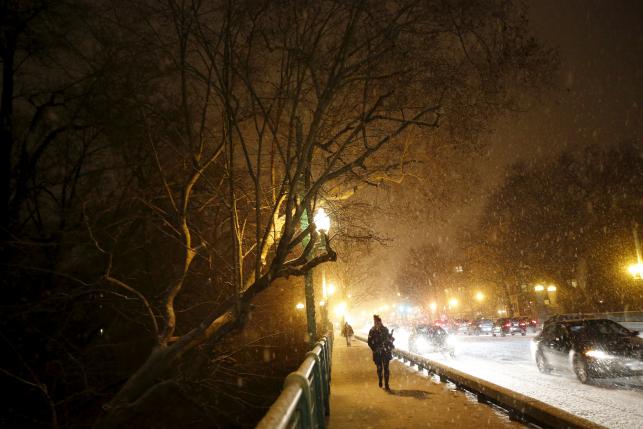 WASHINGTON - With a huge winter storm looming over the eastern United States, many of the region's residents will stock up on canned goods, bottled water and - for some - diapers.

The storm, which is expected to pound the Mid-Atlantic states on Friday and Saturday, has mothers-to-be asking a simple, yet vital, question: What do you do if you go into labor and there are two feet of snow on the ground?

"I'm vascillating between thinking this is no big deal and freaking out," Julie Walsh, a former lobbyist living in the Washington, D.C.-area, wrote on a Facebook page for "These Walls," her personal blog. "GOOD LORD, WHAT WILL I DO IF I GO INTO LABOR IN THE MIDDLE OF A BLIZZARD?!"

"So who has a snowplow and truck that's gonna come take me to the hospital when I go into labor during a freaking blizzard?" wrote Facebook user Jillian Hostetter from Churchton, Maryland.

It is not an unfounded concern, according to Chris Strong, a meteorologist at the National Weather Service in Sterling, Virginia.

"Know that it will be very difficult if not impossible to move around Friday night and Saturday (in the Washington, D.C., area)," Strong said.

The National Weather Service anticipates as much as 24 inches (60 cm) of snow to hit the region during the storm.

Strong suggested that those who have the means and are expecting to give birth in the coming days consider getting a hotel room near a hospital.

States of emergency have already been declared for Maryland and Virginia.

In the event that roads are not clear, women going into labor should call 911, according to Timothy J. Wilson, a spokesperson for the District of Columbia Fire and Emergency Medical Services Department.

"We're going to be in service regardless of the weather," he said.

Elsewhere in the Mid-Atlantic region, pregnant women expressed mild horror over the prospect of giving birth in the middle of a snowstorm.

"Finally a snowstorm," tweeted Golden Oreo (@HomeypopBee) on Wednesday. "I betcha I go into labor."

The hashtag #AwwHellSnow was trending on Twitter in the United States on Wednesday.

Posted in reference to the alarming weather forecasts, the hashtag first originated in February 2015, as part of a "hashtag game," hosted by "The Tonight Show Starring Jimmy Fallon."

"All winter we've had highs of 64 in NYC," tweeted Meredith Frame (@MeredithFrame) from Brooklyn, New York. "Now I'm 9 months pregnant, due any day & here comes a blizzard. Anyone have a sled? #AwwHellSnow." -Reuters