Shining star on the horizon of Pakistani journalism, fearless journalism and another name for truth and confidence as 92 News has completed a six-year journey with full impartiality and journalistic principles.

92 News embarked on a journey of truth, confidence and fearless journalism on February 6, 2015. Whether it is a political arena or a playground, the voice of the oppressed should be taken to the parliament houses, 92 News conveyed every angle of the news to the people in time. 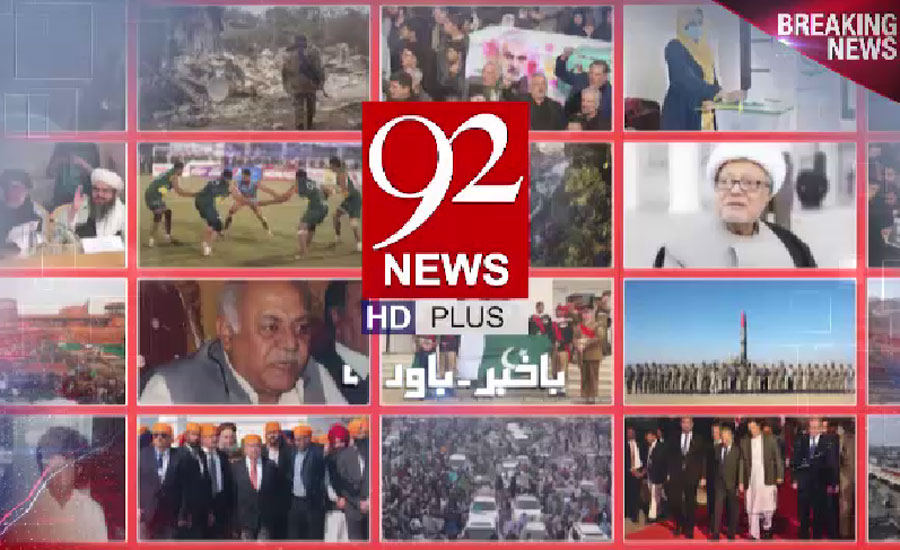 92 News always provide breaking news to its audience regarding the happenings in the politics and every secret chases with responsive way of journalism. Whether delivering social issues to the House or becoming the middle class, 92 News performed every obligation gracefully. 92 News showed all Important events from around the world and exclusive programs and now this HD channel became the first priority of the Pakistani nation.

The journey from HD to HD Plus and hologram technology to 3D augmented reality newsroom has been covered with grace and dignity. 92 News HD Plus is credited with introducing Asia's largest 360-degree virtual studio and hologram technology. No one is competitor of 92 News in the augmented reality and crystal quality of the Pakistani media. The channel broadcasted all the information and incidents to its viewers on all aspects of the country’s dimensions and global horizons. 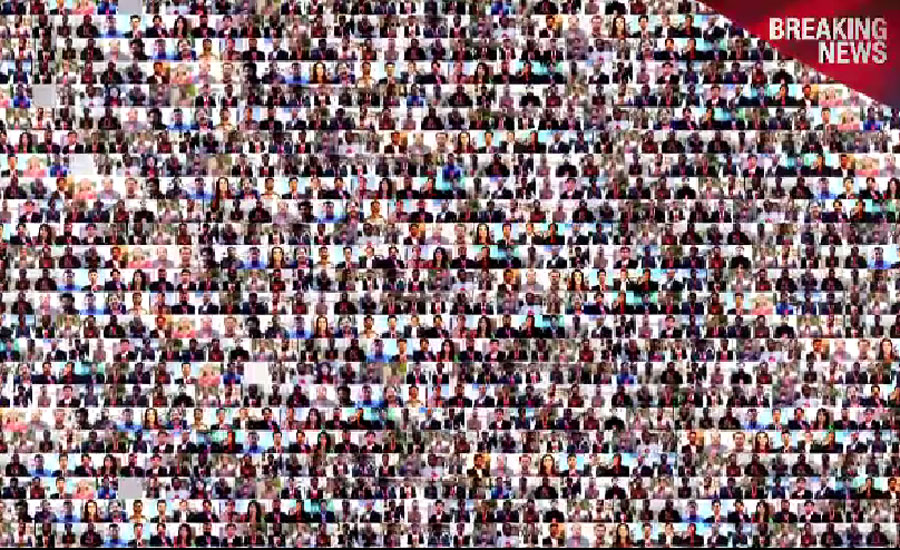 It has been distinction of 92 News HD Plus to inform with responsibility its viewers about all facts linked to each news, politics, showbiz, actions in playgrounds, analyses and realities, programmes representing the current affairs, from pleasant incidents to tragedies, from election to the issue of drinking water in Balochistan and from Operation Raddul Fasaad to Rangers’ operation against saboteurs.

Senior analyst Haroon Rasheed announced the date of the PDM's long march in advance at “Muqabil” program. Anchor person in the program "Night Edition" Shazia Zeeshan exposed the cost of medicines, be it [email protected] or "Cross Talk program", the credit always goes to 92 News for breaking the big news across the country.

92 News always provide breaking news to its audience regarding the happenings in the politics and every secret chases with responsive way of journalism. Whether delivering social issues to the House or becoming the middle class, 92 News performed every obligation gracefully.

Giving authentic news, standing up against the oppressor, approaching the parliament houses for the oppressed, finding out the facts through investigative reporting, this is our goal, this is our job because we are 92 News.

Be it political activity or the playing field, fluctuations in the economy or talking about social and public issues, every breaking news on the dimensions of the country and the global horizon reached the masses through 92 News.

Whether it is the engagements of Prime Minister (PM) Imran Khan or foreign tours or the arrival of world leaders in Pakistan, the news of every moment was reported only by 92 News.

Whether it was the visit of Chief of Army Staff (COAS) General Qamar Javed Bajwa to the front lines or the important statement on national security at the Corps Commanders Conference or the issue of saluting the brave soldiers of the land, 92 News did not lag behind in providing timely news.

When China was hit by the corona virus in early January, 92 News first became the voice of students trapped in China. Not only did it broadcasted the students' position, but he also kept up-to-date with the then Special Assistant for Health for certification and measures to protect the students.

The tragic news of the death of actor Omar Sharif's daughter due to illegal kidney transplant on February 18 also came to the notice of the people on the screen of 92 News. On February 26, 92 broke the news about the confirmation of two cases of coronavirus in Pakistan.

The move of donating plasma by the Sindh governor - who recovered from COVID-19 - came to the notice of the people on the screen of 92 News. When Pak-Iran border was closed for the first time due to Corona, this channel was at the forefront of border coverage. 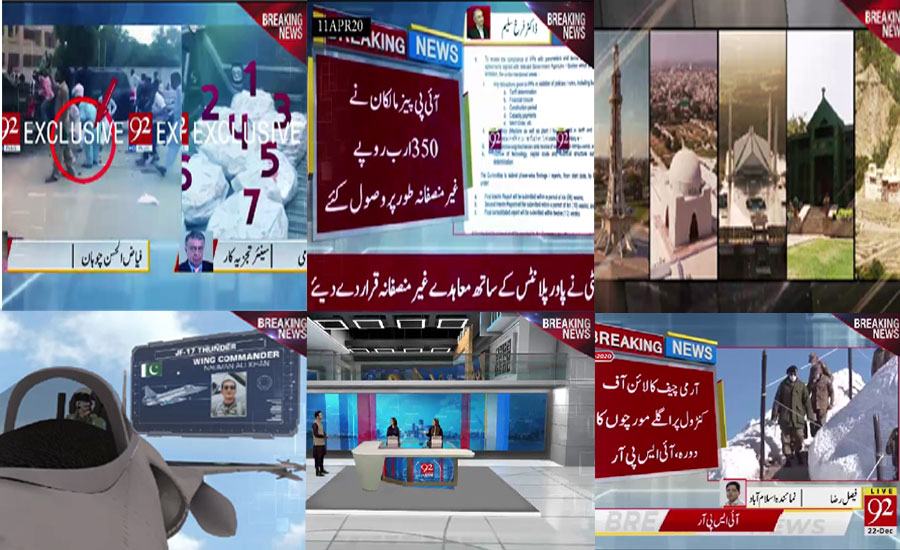 Stone-throwing scenes at NAB office during the appearance of Maryam Nawaz also first appeared on the screen of 92 News. The news of declaring Nawaz Sharif as proclaimed offender in Al Azizia and Avenfield references came to the notice of the viewers from 92 News. Scenes of Shahbaz Sharif's arrest also first appeared on the screen of this HD channel. This channel also topped the coverage of Gilgit-Baltistan elections. as well as summarized the power sector corruption scandal.

Majeed Achakzai's acquittal in the traffic sergeant murder case and the news that the victim's family did not get justice was also broken by this fearless channel. It brought all the news to the public from the interrogation of the accused in the Mufti Adil attack case and the recovery of the vehicle.

When the Indian-funded SRA was exposed, the first news broke was 92 News. This channel also exposed the Indian atrocities and uncovered the mysterious murder of 11 members of the Pakistani Hindu Bheel tribe in India. The channel also broke the news of India's heinous game against Pakistan in FATF. Irregularities in the white elephant BRT for the Khyber Pakhtunkhwa government were also revealed through the screen of 92 News.

When officials of Sindh Building Control Authority (SBCA) discovered China cutting on the land around Mazar-e-Quaid, 92 News kept on reporting facts and investigations against china-cutting. Delivering judgment on the petition of Justice Qazi Faez Isa, the Supreme Court quashed the reference filed against him in the Supreme Judicial Council. This news also became the first honor of 92 News. The channel got the honor of reporting the situation of the bridge even in the stormy rains of Karachi. The people also watched the scenes of 'Bibi Nani Ziarat Bridge' flowing on the screen of 92 News.

This channel conveyed moment-to-moment all news regarding opening ceremony of Pakistan Super League (PSL) 5, exciting opening matches, stadiums being vacated due to Corona and matches being postponed till the resumption of final matches to the audience or cricket fans.

92 News continued to play a role in showing the positive face of the country by covering the news and travel of a cyclist from Balochistan who traveled on a bicycle without a handle and without a pedal. It is the result of the excellent coverage of 92 News, the responsible role in telling the facts of the news that Prime Minister Imran Khan kept sharing the news of 92 on Twitter about the country's economy. Whatever the news, the goal of 92 News has been to find out the facts and with each passing year the success in this goal will continue to grow because "WE ARE 92".

Earlier, on January 19 when the whole country was in mourning at Sahiwal Toll Plaza incident, the HD Plus channel fulfilled journalistic responsibility. The news channel made voice of the victim family and all news, small information about the incident was broadcasted on 92 News screen.

On the day of February 27 – when two Indian Air Force MiG 21 aircraft were shot down by the Pakistan Air Force – 92 News celebrated the national success that India will not forget for a lifetime. With the help of innovative technology, overlays and graphics, the channel presented the PAF’s success in real way which has been acknowledged by across the country.

The live transmission, handover Indian pilot Abhinandan Varthaman captured by the brave Pakistani personnel of PAF to India for goodwill gesture, was acknowledged by across the world including Pakistan on March 1.

92 News break news of a $3 billion package received during Prime Minister Imran Khan’s visit to Saudi Arabia on February 17. 92 News became the voice of Baloch brothers when the issue of drinking water surfaced. It broadcast the facts where water issues exist from Bhag Nari to other areas in Balochistan. It informed its viewers where humans and animals are forced to take water at the same place. It all was shown on the screen of 92 News.

FAISALABAD (92 News) – Special Assistant to the Chief Minister on Information Firdous Ashiq Awan has congratulated the returning officer on securing the victory for the Pakistan Muslim League-Nawaz (PML-N).

LAHORE (92 News) – After failure of the smart lock in controlling the spread of coronavirus, the Health Department and the district administration have recommended a complete lockdown in the city.

No one can sabotage PTI's project of Southern Punjab Secretariat: CM Usman Buzdar

LAHORE (92 News) – Punjab Chief Minister Sardar Usman Buzdar has said that the Southern Punjab Secretariat is the project of the Pakistan Tehreek-e-Insaf (PTI) and no one can sabotage it.

MUZAFFARABAD (92 News) – Six people were killed when a vehicle turned turtle in Nikyal, Kotli on Sunday.

No mosque, seminary will be closed in Pakistan: Allama Tahir Ashrafi

LAHORE (92 News) – Special Representative to the Prime Minister on Religious Harmony Allama Tahir Ahsrafi has said that no mosque and seminary will be closed in Pakistan.