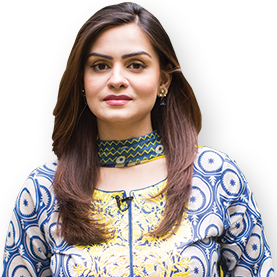 Saadia Afzaal is a Pakistani journalist and television news anchor. She started her media career in 2003 with the state television and got a vast experience of working with a few private channels.She has hosted prime time political talk shows in which top Pakistani politicians, international politicians from the government and opposition members plus global analysts and other famous personalities have appeared.She has covered Foreign Office, Parliament and done a number of interviews with the heads of state and government including President Asif Ali Zardari, President Pervez Musharraf, Prime Minister Yousaf Raza Gillani, and Prime Minister Shaukat Aziz. She has been doing outdoor coverage too. She was the first female anchor to cover SWAT operation with ISPR, covering incidents like Earthquake 2005, Floods 2010, US President Obama election 2008 with collaboration of Voice of America‎, General elections 2008 and 2013 in Pakistan. She has covered a few international events where the head of state or government represented Pakistan including Egypt, India, Spain, US, Turkey, China, Belgium.