SADIQABAD (92 News) – As many as 19 people, including 10 employees,  were injured in a blast in a private bank in Sadiqabad on Thursday. The bank building was badly damaged due to the blast. Nearby shops were also damaged, while glasses of other buildings broke due to the blast. The Rahimyar Khan deputy commissioner said that 15 injured were being treated in DHQ Hospital. He said that two injured have been shifted to Shaikh Zayed Hospital. The nature of the blast could not be ascertained. Security agencies have reached the spot and started investigations. 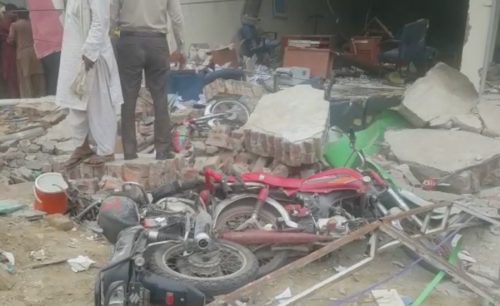 On May 8, 13 people, including five policemen, were martyred while 25 others injured in a suicide attack on a police van outside Data Darbar. The martyred policemen include Muhammad Sohail, Shahid Nazir and Muhammad Saleem. Muhammad Sadam Hussain, Gulzar Ali, Muhammad Ijazul Haq and Muhammad Kamran are among the injured police officers.