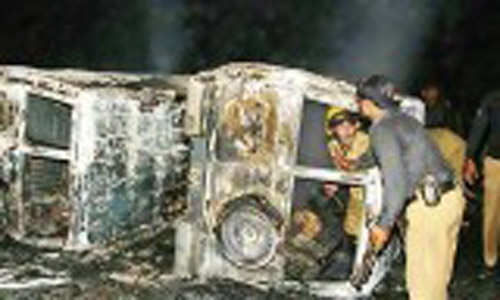 12 killed, 10 injured in Hyderabad van inferno HYDERABAD (92 News) – As many as 12 people died and 10 others sustained burns when a van caught fire due to a gas cylinder blast on Monday. The deceased and injured were shifted to different hospitals in Karachi. The Regional Transport secretary has cancelled the route permits of all the vehicles owned by the responsible bus service. He said that he has ordered a probe into the matter and facts will not be concealed. Meanwhile, Sindh Information Minister Sharjeel Memon has said that they will investigate the tragedy.