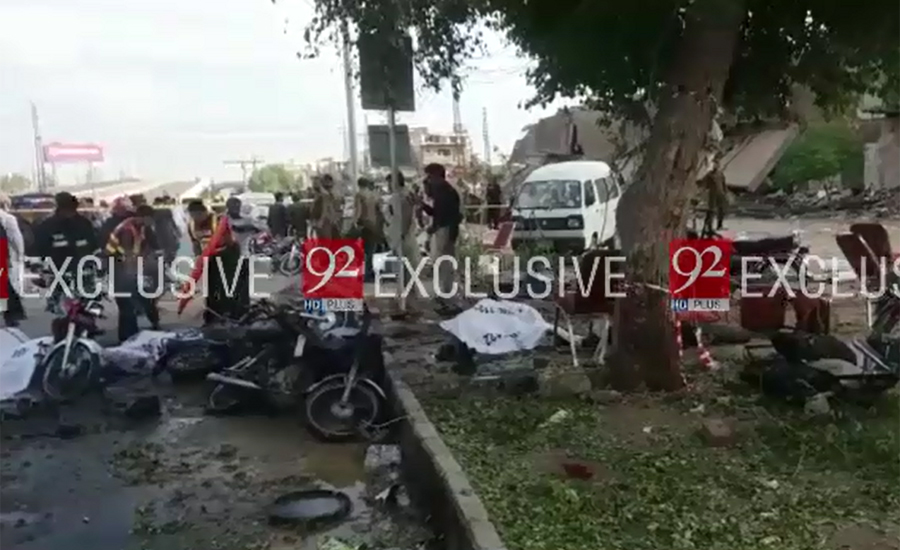 LAHORE (92 News) – Twenty-six people, including an inspector and eight policemen, were martyred while 35 others injured in a blast near Arfa Karim Tower on Ferozepur Road on Monday. Arfa Technology Center Network Operator Khurram Nazir is also among the martyrs. The blast was so severe that glasses of the office IT University VC Umar Saif also broke. The ball bearing used in the blast also fell in his office from the window. However, the nature of the blast could not be determined. The blast caused panic in the area. The rescue operation is going on at the site. Eyewitnesses said that the blast occurred in vehicle, which caught fire. The fire engulfed the parked vehicles and motorcycles. Talking to the media, DIG Operations Ashraf Haider said that the attackers had targeted the policemen. He said that the suicide bomber was riding on a bike. He said that the suicide bomber seemed to be 16-18 years. The Bomb Disposal Squad and forensic experts have started investigations. The police and local administration were busy in the anti-encroachment drive when the blast occurred. Meanwhile, President Mamnoon Hussain, Prime Minister Nawaz Sharif and Chief of Army Staff General Qamar Javed Bajwa have condemned the blast and expressed their sympathies with the bereaved families and injured. Chief Minister Shahbaz Sharif has condemned the blast and sought a report from the police high-ups. He expressed grief and sorrow over the deaths and prayed for the recovery of the injured. The chief minister ordered the best possible treatment to the injured. He also ordered to expedite the rescue operation. On the other hand, the CTD police have registered a case of the suicide blast. A suicide bomber and three facilitators have been nominated in the case. The case has been registered on the complaint of SHO Abid Baig.