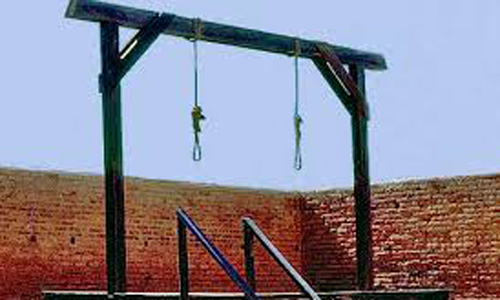 ISLAMABAD (92 News) – As many as 15 convicts were hanged in different jails of the country on Tuesday. Latif, Zafar and Inayat were hanged in Gujranwala. Inayat had killed six of a family, including a woman, in the Sodhra police limits. In Faisalabad, Nizamuddin, Muhammad Hussain and Azam were hanged. Nizamuddin and Muhammad Hussain were involved in a triple murder case each. Allah Rakha and Ghulam Nabi were hanged in Lahore. In Sialkot, Luqman and Saleem were hanged. Both had killed a 14-year-old girl after raping her. Azhar Mahmood was hanged in Gujrat, while Sultan was executed in Multan, Riaz Ahmed in Machh Jail, Liaquat in Sahiwal and Raja Raees in Rawalpindi. On the other hand, the execution of Sarfraz and Shakeel was postponed in Adyala Jail.