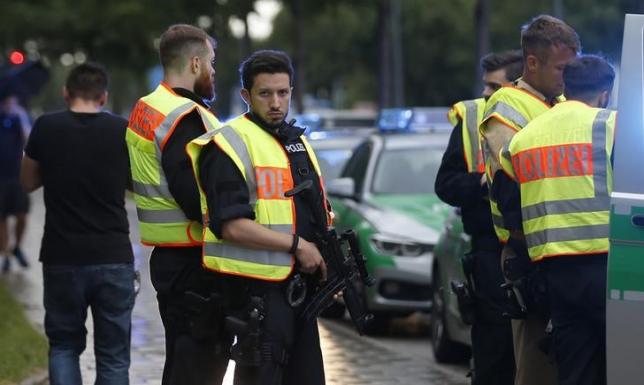 MUNICH – Gunmen went on a shooting rampage in a shopping mall in the southern German city of Munich on Friday, killing and wounding many people, police said. It was the third major act of violence against civilian targets to take place in Western Europe in eight days. Previous attacks in France and Germany were claimed by the Islamic State militant group. Munich police said they suspected it was a terrorist attack. Authorities were evacuating people from the Olympia mall but many others were hiding inside. Munich's main railway station was also being evacuated. A Munich police spokeswoman said multiple people were killed or wounded. No suspects had been arrested yet, she said. "We believe we are dealing with a shooting rampage," the spokeswoman said. Bavarian broadcaster BR said six people were dead and many wounded in the shopping mall. NTV television had reported the Bavarian Interior Ministry as saying three people were dead, but the ministry said later it would not confirm this. More than one gunman was believed to be involved, the police spokeswoman said. "We believe there was more than one perpetrator. The first reports came at 6 p.m., the shooting apparently began at a McDonald's in the shopping centre. There are still people in the shopping centre. We are trying to get the people out and take care of them," she said. Police special forces had arrived at the scene, NTV said. Munich police said on Facebook that witnesses reported three different people with weapons. Shooting was also reported on Hanauer Street and Ries Streetet, near the mall. The police told people to stay in their homes or take cover in buildings. Authorities were evacuating people from the Olympia mall. But many others were hiding inside, an employee told Reuters by telephone. "Many shots were fired, I can't say how many but it's been a lot," the employee, who declined to be identified, said from the mall. "All the people from outside came streaming into the store and I only saw one person on the ground who was so severely injured that he definitely didn't survive," "We have no further information, we're just staying in the back in the storage rooms. No police have approached us yet." Munich transport authorities said they had halted several bus, train and tram lines. The shopping centre is next to the Munich Olympic stadium, where the Palestinian militant group Black September took 11 Israeli athletes hostage and eventually killed them during the 1972 Olympic Games. IS SUPPORTERS CELEBRATE There was no immediate claim of responsibility but supporters of Islamic State celebrated the rampage on social media. "Thank God, may God bring prosperity to our Islamic State men," read one tweet. "The Islamic state is expanding in Europe," read another. Friday's attack took place a week after a 17-year-old asylum-seeker wounded passengers on a German train in an axe rampage. Bavarian police shot dead the teenager after he wounded four people from Hong Kong on the train and injured a local resident while fleeing. German Justice Minister Heiko Maas told Bild newspaper's Friday edition before the mall attack that there was "no reason to panic but it's clear that Germany remains a possible target". The incidents in Germany follow an attack in Nice, France, on Bastille Day in which a Tunisian drove a truck into crowds, killing 84. Islamic State also claimed responsibility for that attack. Friday is also the five-year anniversary of the massacre by Anders Behring Breivik in Norway. Breivik is a hero for far-right extremists in Europe and America. The Munich assault was also reminiscent of Islamist militant attacks in a shopping mall in Nairobi, Kenya, in September 2013 and on a hotel in Mumbai, India, in November 2008. –Reuters