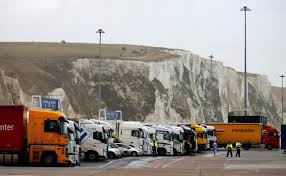 LONDON (Reuters) - For BMW (BMWG.DE) to run its factories in Britain, it needs 150 trucks a day full of parts and equipment to arrive from mainland Europe. It sends 118 trucks, also packed with products, in the other direction.
The level of integration between Britain and the bloc shows the challenge facing the auto industry if Britain leaves the EU with no deal, or without frictionless trade, an industry conference heard on Tuesday. Stephan Freismuth, Customs Manager, BMW Group, said whatever the future relationship looked like, any sort of customs border between Britain and the EU would cause delays to the trucks which carry parts for its just-in-time manufacturing of cars. All the administration required to clear the goods would take time, he said. “If there is a delay of five minutes there will be delays at the border,” Freismuth told the Society of Motor Manufacturers and Traders conference. Eurotunnel, the company which runs trains that carry lorries and cars through the undersea tunnel between Britain and France, said that at peak times 250 trucks per hour travel in each direction. Making checks on such traffic volumes with the current infrastructure would be difficult. “If friction means inspection then we have to have space for inspection and in the tunnel, and in the port of Dover’s context, there is no space, they are literally on the cliff edge...so there’d have to be some form of inland space,” said Eurotunnel’s UK director of public affairs John Keefe. Prime Minister Theresa May’s position is that Britain will leave the customs union which groups EU members in a duty-free area where there is a common import tariff for non-EU goods. With only nine months left until Britain is due to leave the EU in March, there is little clarity about how trade will flow. A transition period would follow until the end of 2020 and Britain hopes that a new deal will kick in between from then on. But auto manufacturers say that they are running out of time to plan for a new customs arrangement, given that they don’t know what it will look like yet. “December 2020 doesn’t look very far away at all. March 2019 looks quite terrifying, so for us it’s making sure we’ve got a long enough transition period that allows everybody to respond,” Ford Motor Company’s (F.N) UK customs supervisor Penny Todd said. She said Ford was planning for the worst case scenario: a hard border. For that, the company would need to provide import and export declarations, and those have knock-on effects in terms of the requirement for agents at the border, the brokers who do the declarations, requiring in-house staff to manage the process, plus the I.T. systems to enable those processes. All of which will add cost to Ford’s business. Checking trucks or requiring trucks carrying goods through ports to submit information about their load will not be easy to do, said the chief executive of the British Ports Association. “It will take a big culture shift. There’s I.T. investment required. The haulage industry, the freight industry will be required to submit a lot of information which it doesn’t currently do now,” British Ports Association’s Richard Ballantyne said.