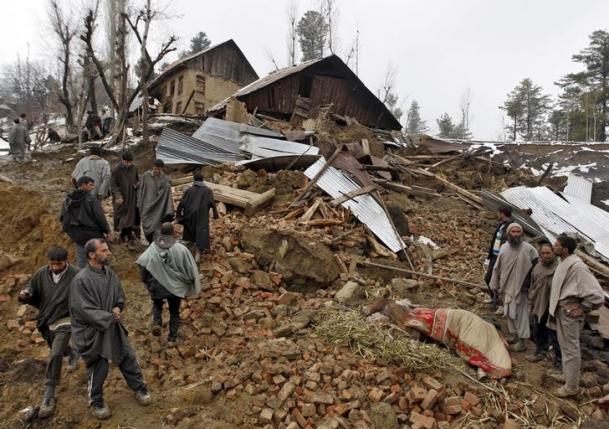 SRINAGAR – Heavy rains and a landslide in the Indian Held Kashmir killed 17 people, police said on Tuesday, as authorities continued working to rescue stranded villagers, with unseasonal rains raising fears of flash floods in the mountainous north. Fifteen people were killed when a hillside collapsed onto a house in Ledhan village, about 40 km (25 miles) from the capital Srinagar, before dawn on Monday. Army and police used shovels and diggers to search for those missing."We are still searching for one person who is still buried," said Fayaz Ahmad Lone, a local police superintendent. Police said two other people died in flash floods in another part of the state. Hundreds of people fled their homes as Kashmir's main rivers began to swell and weather forecasters predicted further downpours in the region that was struck by devastating floods seven months ago. India is experiencing more extreme rainfall events as the global climate warms, according to a study of 50 years of data by the Indian Institute of Tropical Meteorology. The past month has been the wettest in more than a century, and damage to crops has been blamed for a spate of farmer suicides in recent weeks. –Reuters