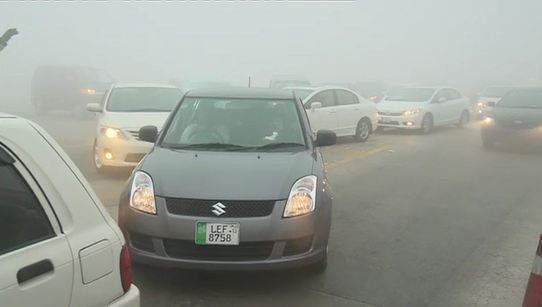 LAHORE (92 News) – At least 18 persons have been injured in various fog-related traffic accidents in many areas of Punjab on Friday. Motorway has also been closed due to dense fog in many areas. Continuous intense fog in several cities of Punjab has lowered the temperature and causing difficulties for passengers on Motorway and highways. As per details, the visibility in several cities in Punjab including Lahore and Islamabad has been reduced considerably as drivers were seen moving with the headlights of their vehicles and fog lamps which severely affected the traffic flow. The motorway has been closed for traffic at many places. Thick fog engulfed parts of Punjab this morning, leading to cancellation of two train services, while the foggy conditions has disturbed flight schedule causing inconvenience to passengers. At least 12 people were injured when a school van collided with a tractor trolley in Attock. Meanwhile, at least six persons were injured when three vehicles collided with near Muridkey.