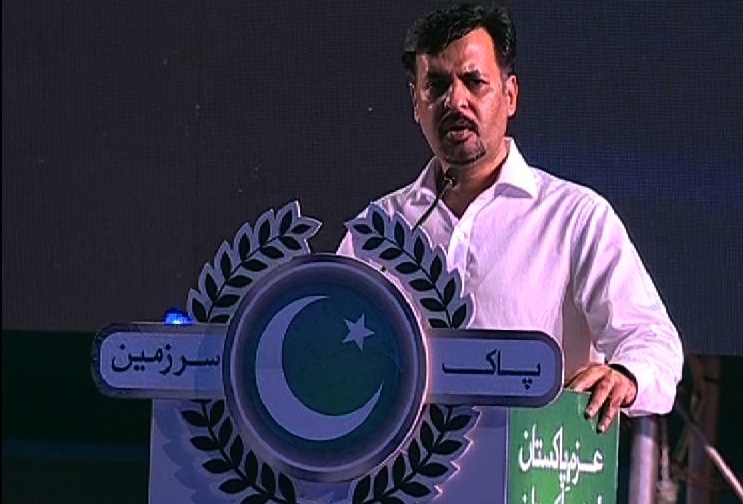 KARACHI (92 News) – Pak Sarzameen Party (PSP) on Sunday demonstrated public power during a political gathering at Karachi’s Bagh-e-Jinnah. PSP Chairman Mustafa Kamal took jibe at the federal and provincial government. He said that 18th Amendment has become a punishment for citizens of the metropolis. “Seven million children do not go to schools and AIDS is being spread speedily in Sindh,” he said, adding that I do not understand where Rs799 billion are being spent in Sindh,” he asked. On the occasion, other PSP leaders including Anees Qaimkhani also addressed the political gathering. The PSP organized a public meeting today at the same location where its arch-rival had held a ‘show of strength’ around three months ago. Earlier this month, PSP chief Mustafa Kamal had announced to hold a public rally at Karachi’s Bagh-e-Jinnah on July 21 (today). “On July 21, we are organising a big rally for the downtrodden people,” Mustafa Kamal said. PSP is in competition with the MQM-P, it remains to be seen whether the Mustafa Kamal-led party can fill the venue to its capacity since his former party was not able to work its magic on people without its London-based founder Altaf Hussain. The PSP chief had said that around 140 workers belonging to Pakistan People’s Party (PPP), Pakistan Tehrek-e-Insaf (PTI), Pakistan Muslim League-F, Muttahida Qaumi Movement-Pakistan (MQM-P) have joined ranks of PSP. He had reiterated that he could resolve the issues of Karachi in a period of six months only if the residents of Karachi would hand over the city to his party. Mustafa said he can shake hands with MQM-P on a deal for resolving issues of Karachi on immediate basis. On April 26, addressing the workers’ convention in Quetta, he said that 80 percent areas of Blaochistan are without electricity. “A majority of areas are without the gas supply,” he said. The PSP chief said that mortality rate among the children is on the rise due to substandard food and water. “A party winning the elections 11 times in the name of Mohajirs has failed badly,” he said. Mustafa Kamal asked the people to vote for him to end ethnic differences. “We had added billions of rupees to the national exchequer and had not looted a single rupee,” he claimed. He urged the state to pardon the estranged people and bring them to national mainstream. “I congratulate the people who gave the estranged people flowers after getting weapons from them,” he observed.