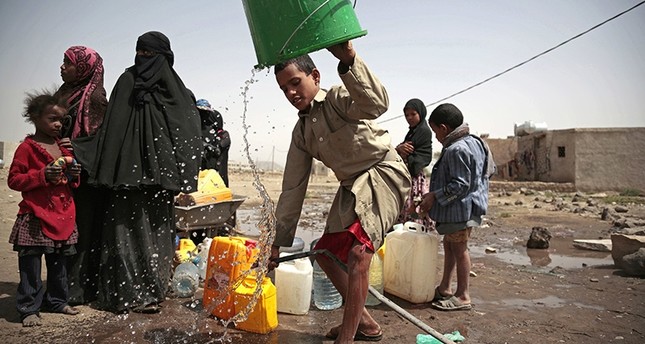 GENEVA (Reuters) - The capital Sanaa and al-Bayda have joined the list of Yemen cities without clean water due to the blockade by a Saudi-led coalition which has cut off supplies of fuel for pumping, the International Committee of the Red Cross (ICRC) said.

Some 2.5 million Yemenis now lack access to clean water in crowded cities, “putting them at risk of another major outbreak of water-borne disease”, and other cities are running out of fuel, ICRC spokeswoman Iolanda Jaquemet said.

Since April, some 940,768 people in Yemen have been infected with cholera, a water-borne disease, in the world’s worst epidemic in a single year that has killed at least 2,200, and cases of dysentery are being reported, she said.

“The water and sewage systems in Dhamar and Amaran are now providing only half the normal coverage,” Jaquemet added.

The Saudi-led coalition closed all air, land and sea access to Yemen on Nov. 6 following the interception of a missile fired towards the Saudi capital, saying it had to stem the flow of arms from Iran to its Houthi opponents in the war in Yemen.

On Friday, the ICRC said three cities - Saada, Taiz and Hodeidah - had run out of clean water because the blockade had cut imports of fuel needed for pumping and sanitation, depriving close to 1 million people of clean water.

The United Nations has appealed for the blockade to be lifted, saying it could spark the largest famine the world has seen in decades. Some seven million people are already on the brink of famine.

The ICRC had reports of some 20 kidney patients requiring dialysis having died over the last weeks “due to the non-availability of treatment”, she said.

Dialysis centers in the Houthi-held port city of Hodeidah are particularly hard-hit, working at only 30 percent of their capacity, she said. Other centers in Yemen have been forced to close, sending more patients to three ICRC-supported facilities. “Given the current state of supplies, it is expected that dialysis centers in Ibb, Taiz and al-Bayda will soon be forced to close, leaving close to 1,000 patients without the sort of treatment on which their lives depend,” Jaquemet said.