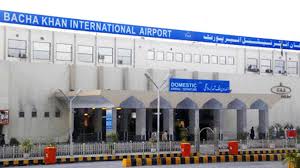 PESHAWAR (92 News) – A helicopter crash-landed at Peshawar’s Bacha Khan airport on Saturday. Four persons were on-board, two of them were injured during the incident, however, no fatalities were reported, according to the sources within the airport administration. Fire brigade trucks and ambulances have reached the runway for rescue. Security forces cordoned off  the premises earlier soon after the incident took place.