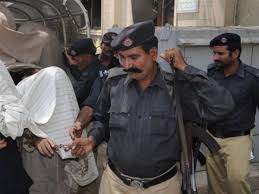 KARACHI (92 News): The police claimed to have arrested two target killers involved in the murder of 15 people, including doctors. SSP Korangi Junaid Sheikh said that the target killers were identified as Iqbal alias Shahzad and Ayaz. He said the accused were also involved in sectarian killings. He said that the targeted killers had murdered 15 people in Landhi, Korangi and other areas. “The culprits are also involved in several acts of extortion,” he added.