KARACHI (92 News) – 20-year record of cold weather was broken in Skardu district and its adjacent areas as temperature dipped to -21°C on Monday. Flights between Islamabad and Skardu remained suspended due to snowfall and harsh weather. Because of the extreme cold weather ponds, drains, lakes and rivers were frozen. On the other hand, the thick fog has badly affected the flow of road traffic in several cities of Punjab. The Motorway section from Sher Shah Interchang to Sukkur (M5) has been closed as visibility was very low, said Motorway Police spokesperson. Similarly, Motorway section from Peshawar to Swabi (M1) in Khyber Pakhtunkhwa has also been closed due to dense fog. According to the Pakistan Metrological Department, Dense fog is likely to prevail in Islamabad, most plain areas of Punjab and upper Sindh while in few districts of Khyber Pakhtunkhwa during morning and night hours on Monday. Cold and dry weather is expected elsewhere in the country while very cold in upper areas, said the MET office in its forecast.

Flight operations at Islamabad affected due to fog 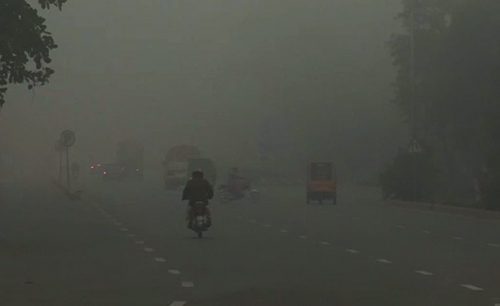 The flight operations at Islamabad International Airport affected due to heavy fog in adjoining areas of the airport. According to a PIA spokesman, the flight schedule was affected due to heavy fog and the flights schedule was affected due to low visibility. The spokesman asked the passengers to register their numbers with the authorities in ticket booking section so that they could be informed regarding any delays. The Pakistan Meteorological Department (PMD) said the snowfall would stop by the night in upper areas of the country. Overall weather remained very cold and dry throughout the day. The PMD forecasted that mainly cold and dry weather is expected in most parts of the country in the next 24 hours. “Foggy conditions are expected at a few places in plain areas of Punjab, upper Sindh and Peshawar division during night/morning hours.”