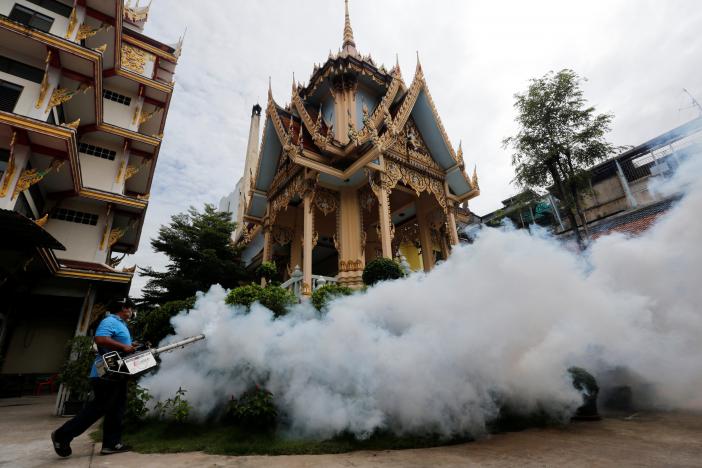 BANGKOK - Thailand has recorded about 200 cases of Zika since January, the health ministry said, making it a country with one of the highest numbers of confirmed cases in the region. It was the first time Thailand's health ministry has confirmed the number of Zika cases this year. The announcement comes a day after health experts called on Thailand to be more transparent in reporting the Zika threat to the public after health officials played down risks from rising infections of the mosquito-borne virus. Health officials have expressed concern that disclosing information on Zika, which is linked to serious birth defects, would damage Thailand's lucrative tourism industry. "Since January, we have recorded about 200 cases and over the past three weeks, we have confirmed an average of 20 new cases per week," Ministry of Public Health spokesman Suwannachai Wattanayingcharoenchai told Reuters. "The number of cases is stable," he said, without giving further details. Island city-state Singapore reported its first locally infected Zika patient on Aug. 27 and since then, the number of reported infections has soared to more than 300. Malaysia and the Philippines have also reported cases. The virus, which is affecting large parts of Latin America and the Caribbean, has been circulating in Asia for years. The lineage of the virus circulating in Asia is different to the one in the Americas, researchers say. The level of population immunity to the lineage of Zika in Asia remains unknown, according to the World Health Organization. Suwannachai urged the public not to panic and reiterated a message aimed at reassuring tourists. "People shouldn't be scared to visit provinces affected by the Zika virus," Suwannachai said. Zika infections in pregnant women have been shown to cause microcephaly - a severe birth defect in which the head and brain are undersized - as well as other brain abnormalities. The connection between Zika and microcephaly first came to light last year in Brazil, which has since confirmed more than 1,800 cases of microcephaly. Thailand has found no cases of microcephaly linked to Zika and it is monitoring about two dozen pregnant woman and about six who have given birth with no complications, the health ministry said. In adults, Zika infections have also been linked to a rare neurological syndrome known as Guillain-Barre, as well as other neurological disorders. The virus was first identified in Uganda in 1947. -Reuters