CENTURION (Web Desk) – Pakistan set South Africa a target of 317 runs to win the third one-day international at Supersport Park, Centurion on Friday. Imamul Haq hit 101 laced with eight fours. Babar Azam (69), Mohammed Hafeez (52), Imad Wasim (43) and Shoaib Malik (31) were the main scorers. Dale Steyn and Kagiso Rabada grabbed two wickets each. Beuran Hendricks and Tabraiz Shamsi took one wicket each. The five-match one-day international series (ODI) is leveled 1-1. Pakistan beat South Africa in the first ODI at St George’s Park as Imam-ul-Haq and Mohammad Hafeez set up a five-wicket win, but South Africa bounced back in the next ODI in Durban with Hendrick ‘Rassie’ van der Dussen and Andile Phehlukwayo securing a series-levelling win at Kingsmead. The Proteas have made three changes to the squad: Dale Steyn and Quinton de Kock are back, replacing Duanne Olivier and Heinrich Klaasen, while Dane Paterson has been replaced by in-form left-arm seamer Beuran Hendricks. The third ODI also means a Steyn vs Hafeez contest. In 28 meetings between the two, Hafeez has scored 158 runs against Steyn while being dismissed a staggering 15 times. SCOREBOARD 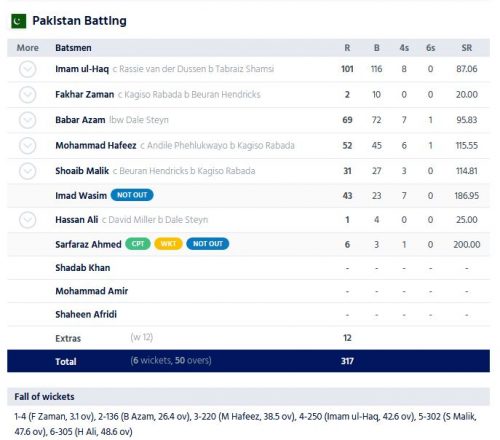