ISLAMABAD (92 News) - Prime Minister Imran Khan on Sunday invited overseas Pakistani businessmen to invest in different sectors in Pakistan.  During his interaction with leading Pakistani businessmen in US at Pakistan House, he received green signals from the visiting participants for investment in energy and tourism sectors of Pakistan. Flanked by Chief of Army Staff (COAS) General Qamar Javed Bajwa, ISI director general and Inter Services Public Relations (ISPR) director general Maj Gen Asif Ghafoor, the premier earlier reached Washington DC to receive state welcome by senior US State department officials. Foreign minister Shah Mehmood Qureshi and Pakistan's Ambassador to US were also present at the airport. This is said to be first time in the history of Pakistan that a high-powered delegation led by Prime Minister Imran Khan traveled through a commercial flight. The premier will meet US President Donald Trump on tomorrow and also hold meetings with the US Congressmen and heads of International Monetary Fund (IMF) and World Bank (WB). Democratic Party leader Tahir Javed and some leading businessmen including Javed Anwar held meetings with Imran Khan at the Pakistan's embassy. 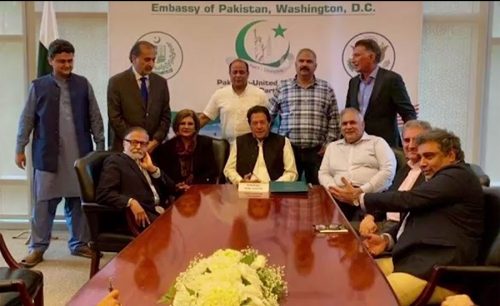 Khan invited the delegates to invest in energy and tourism sectors upon which they showed their willingness. "The overseas Pakistanis have also contributed to the development of Pakistan."

Terrorism incidents will decline due to Pak-Afghan fencing

Pakistan's military spokesman Maj Gen Asif Ghafoor also held media briefing at the embassy. He said Pakistan armed forces had defended the geographical boundaries of the country in a befitting manner. Ghafoor said terrorism incidents in Pakistan are reduce owing to fencing along Pak-Afghan border. "Now the prime focus of security forces is to maintain state writ in Balochistan." 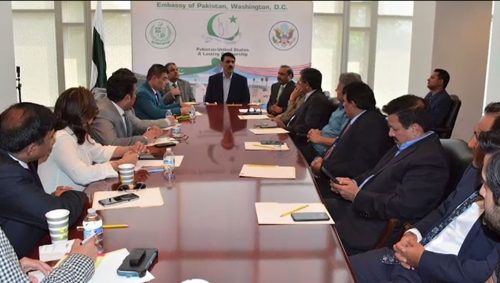 The DG ISPR told newsmen that army chief General Qamar Javed Bajwa would visit Pentagon to have interaction with the military leadership of the United States. The army chief would be accompanied by Prime Minister Imran Khan during his meeting with President Donald Trump tomorrow, he added. The DG ISPR said border control was much better after the erection of the security fence along Pak-Afghan border. He said border fence would help reduce terrorism-related incidents. He said now the main focus of the security forces was the development in Balochistan and restructuring of terrorism affected areas in coordination with the civil administration. He briefed the media regarding the spike in tensions with India in February early this year and the overall security situation of the country. The DG ISPR lauded the role of media in highlighting positive image of the country abroad.

A good number of Pakistanis living in USA thronged the federal capital, Washington DC, to give a warm welcome to Prime Minister Imran Khan. Carrying flags of Pakistan, they danced to the tune of drums and chanted slogans in favour of Pakistan and Prime Minister Imran Khan. Among the crowds were PTI supporters who also carried PTI flags. An auto rally was also organized to express solidarity with Pakistan. The participants were carrying placards of PM Imran and COAS Qamar Bajwa. 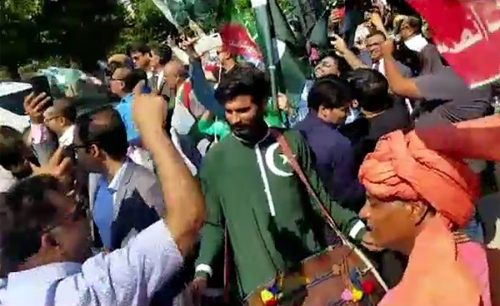 Premier's activities in US

On July 23, Imran Khan will face editors of US newspapers besides meeting US Speaker of the House Nancy Pelosi. The premier's official schedule will also include interaction with Pakistani business community, address to a business summit and visit to the US Institute for Peace. The US government has placed Pakistan Prime Minister's visit in special category which means prolonged meeting with the US president, a number of feats, official residence and other expenses on Us expense. Foreigner Minister Shah Mehmood Qureshi told media in Washington DC that Prime Minister Imran Khan will reach US around 3:30pm. He said the premier will be given feast at the White House and two meetings with US's Trump have been scheduled. Qureshi said the premier will meet US Secretary of State Mike Pompeo, economic experts and Pakistani businessmen. To a question, he said Afghanistan's challenge is 18-year old. "We shall move forward while making the premier's visit to US a strong base for improved bilateral relations," the FM said. https://www.youtube.com/watch?v=Yv6-955EDg0