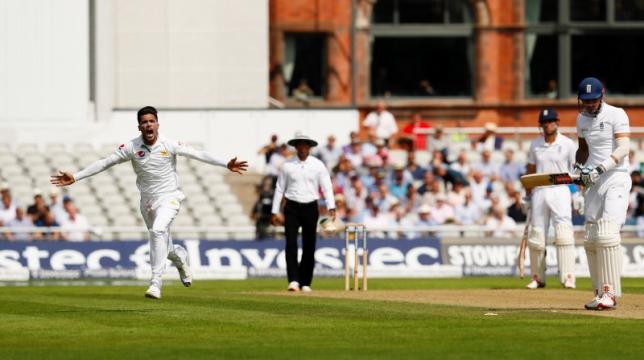 MANCHESTER (92 News) - England captain Alastair Cook won the toss and elected to bat in the second test against Pakistan at Old Trafford on Friday as the hosts seek to level the four-test series. England opted against fielding a second spinner in Adil Rashid and welcomed all-rounder Ben Stokes and paceman James Anderson back in the side. Pakistan picked the same side that won the first test by 75-runs at Lord's. "As always when we come to Old Trafford the grounds man does a great job and produces a fair wicket," Cook said after winning the toss. Pakistan captain Misbah-ul-Haq too wanted to bat first but had no problem starting with the ball, saying "it's a matter of staying disciplined whatever you do first".   The Second Test between Pakistan and England started at Old Trafford on Friday (today). The series comprises four Tests, five One Day Internationals and a T-20 match. Misbah-ul-Haq is leading the national team in the Test series while Azhar Ali and Sarfraz Ahmed will lead Pakistan team in ODIs and Twenty-20 respectively. Pakistan is leading the series with comprehensive win in first Test Match against England at Lord’s. Pakistan’s win at Lord’s was a performance typical of the classic-era Pakistan teams where the batsmen, even on flat wickets, usually scored just about enough runs to allow their bowlers to barge through the opposition’s batting line-up. England will be boosted by the return of pacer James Anderson and all-rounder Ben Stokes, while also calling leg-spinner Adil Rashid into the squad. The team management has been pondering on playing two spinners in the game, which makes the selection of the playing 11 a tough task. Pakistan, created history beating England by 75-runs at Lords to win their first Test at the venue in 20 years. Their last triumph came in 1996. Known as a mercurial side, the Men In Green put on a performance where everyone contributed — with the bat, ball and in the field. Yasir Shah was the star of the show taking 10 wickets for 141 runs to spin Pakistan to victory; but that is not to overshadow the hundred made by skipper Misbah-ul-Haq in the first innings or the role played by Asad Shafiq or Wahab Riaz. Left-arm pacer Mohammad Amir finally got redemption six years after he was involved in the spot-fixing controversy, picking up the final wicket of Jake Ball to send the nation into a frenzy. While not at his best, Amir will look to improve as the series plays on. Teams: England: Alastair Cook (captain), Alex Hales, Joe Root, James Vince, Gary Ballance, Ben Stokes, Jonny Bairstow (wicketkeeper), Moeen Ali, Chris Woakes, Stuart Broad, James Anderson. Pakistan: Mohammad Hafeez, Shan Masood, Azhar Ali, Younis Khan, Misbah-ul-Haq (captain), Asad Shafiq, Sarfraz Ahmed (wicketkeeper), Wahab Riaz, Mohammad Amir, Rahat Ali, Yasir Shah.