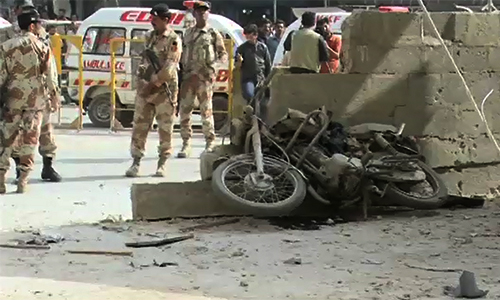 KARACHI (92 News) – Three officials were injured in a cracker attack on Rangers check post in Korangi Crossing on Thursday. Chief Minister Syed Qaim Ali Shah has demanded a report from the IGP Sindh. Talking to the media at the blast site, DG Rangers Maj-Gen Bilal Akbar said that presently it could not be determined who conducted the blast. "The police have arrested a man involved in the previous cracker attacks," he said. The SSP Korangi said that according to preliminary investigations, four attackers were riding on two motorcycles.