30 killed in clashes at football match in Egypt 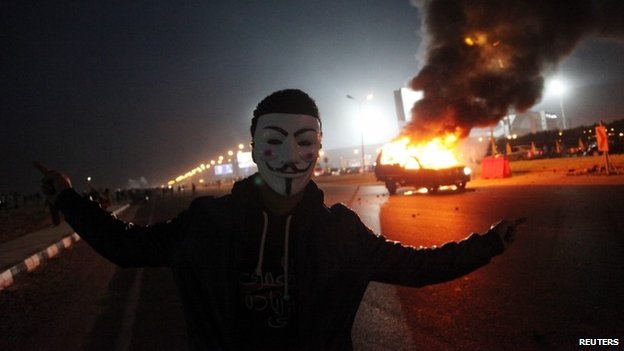 30 killed in clashes at football match in Egypt

At least 30 people were killed and several others injured in clashes between police and Egyptian soccer fans who were trying to force their way into a stadium here for a match, in one of the deadliest game-related incidents in the soccer-crazy country. The Ministry of Interior said the incident took place outside the Air Defence Stadium in Cairo ahead of a match between Egyptian Premier League clubs Zamalek and ENPPI. The clashes started when police used tear gas to disperse members of the Ultras White Knights fan group in front of the stadium, a few hours before Zamalek played ENPPI in a top-of-the-table clash. The reports said supporters of Zamalek, known as Ultras White Knights, tried to storm into the match without tickets. Most of the dead were suffocated to death after police used tear gas to disperse the crowd, doctors and witnesses said. At least 30 had died in the clashes, Al-Ahram Arabic news website reported. "They died of suffocation and stampede after being tear-gassed," a medical source at the Ahli Bank Hospital, which received 14 bodies, told Ahram Online. Egypt's cabinet suspended the league competition for an indefinite period following the latest tragedy, saying in a statement that Zamalek's fans failed to adhere to the safety procedures required to enter the stadium, it said. "More than ten thousand people, who did not have tickets for the match, tried to break into the stadium. A number of them were killed and dozens injured due to stampede," the Egyptian Interior Ministry said in statement. The security forces tried to disperse the fans after they blocked road and torched a police vehicle. A security source said that 17 Zamalek fans were arrested for inciting violence. Egypt's prosecution said the bodies of the victims were transferred to a Cairo morgue. State-run news agency MENA said at least 25 were injured. The match went ahead despite the deadly clashes but Zamalek's full-back Omar Gaber, a favourite figure among the ultras, withdrew in support of the fans. There are doubts over whether the league competition will resume this season after it was postponed for an indefinite period. Egypt has curbed the number of people allowed into football matches since a riot at a stadium in Port Said where more than 70 people were killed in a similar incident after a game in February 2012. –PTI