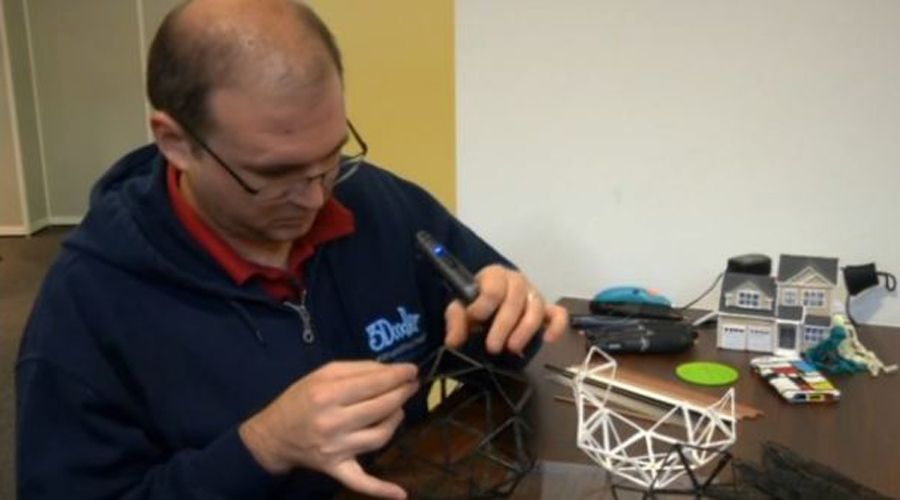 NEW YORK – 3D printing pens have been on the market for several years. But the 3Doodler Pro takes it to a whole new dimension. It gives professionals such as architects and designers the power to sketch out their creative vision in mid-air. "So the 3Doodler Pro is quite the step up in terms of the ability to use a variety of materials. Because we are offering wood, brass, copper, polycarbonate, ABS, PLA; it's a much larger breadth of materials that are available. All of them have very different properties and uses, and they also have different temperatures and different speeds, which is why we have all the variability on the pro pen itself." The high-performance Pro model features a number of creative enhancements, such as dials to adjust temperature and speed of the plastic as it's dispensed. Maxwell Bogue, CEO & Co-Founder Of 3Doodler, says: "Depending on what you're doing; if you're drawing in the air you obviously want to have it colder, if you're joining two pieces together you actually want to have it slightly hotter so that the materials weld together better. And then we have a very simple control; forward button, reverse button. There's also fan control so you can turn the fan up or turn the fan down, or just turn the fan off. And it really offers a lot more control over the entire process of playing with the 3D pen." The makers say complex structures can be built quickly – ideal for visualising a prototype design before turning on the computer. Maxwell says: "It allows you to make these structures that architects and designers are wanting to create to really bring their work to reality. Before you really go into a 3D program or something like that, you can actually just sketch it out and see if the idea has merit." The 3Doodler Pro was unveiled this week at the IFA electronics show in Berlin. It's available now, with prices starting at 249 dollars. –Reuters