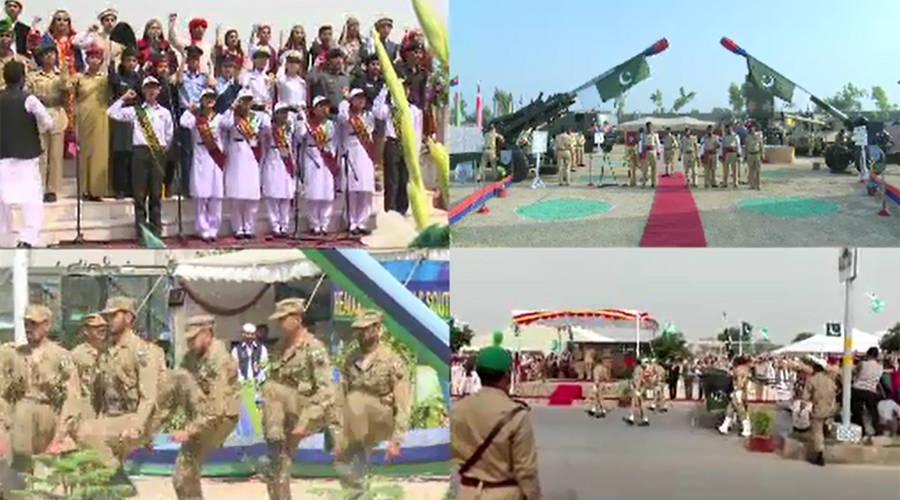 ISLAMABAD (92 News) – The 51st Defence Day was celebrated with traditional fervor and enthusiasm across the country, pledging that every Pakistani will be ready to sacrifice his/her life to defend the motherland in the wake of any difficult time. In Karachi, an impressive ceremony was held at Mazar-e-Quaid. The ceremony started with the national anthem. Later, the PAF cadets assumed the duty of guards at mausoleum. In Lahore, an impressive ceremony was held at Fortress Stadium. The competitions of tent-pegging and war exercises were held. An exhibition of war planes and equipment was held at Airbase. The visitors showed keen interest in F16 and JF-17 Thunder jets. A fly-past was also conducted on the occasion. Another ceremony was held at Rangers Headquarters Punjab to pay tributes to the martyrs of the 1965 war. DG Rangers Punjab Maj Gen Umar Farooq Burki was the chief guest. A message of COAS General Raheel Sharif with regard to the Defence Day was read out on the occasion. In Multan, a ceremony was held on the Defence Day. Corps Commander Multan Lt Gen Ashfaq Nadeem Ahmed and relatives of the martyrs also participated in the ceremony. The participants paid rich tributes to the martyrs. Children also presented the national songs. In Rawalpindi, an impressive ceremony was held at Nur Khan Airbase. Students recited national songs. At the end, PAF fighter pilots displayed an excellent fly-past. The audience highly applauded the performance of the pilots.