RAWALPINDI (92 News) – Six Indian soldiers, including an officer, were killed in Pakistan Army’s befitting response to Indian ceasefire violations (CFVs) in Tatta Pani Sector along the Line of Control (LoC). According to the DG ISPR, Indian unprovoked firing had martyred three civilians, including a seven-year-old, boy. 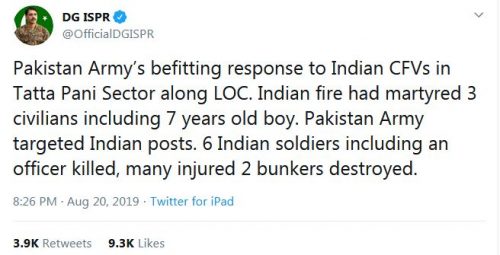 The DG ISPR said that Pakistan Army targeted Indian posts. “As a result, six Indian soldiers, including an officer were killed, while several others injured. Moreover, two bunkers were destroyed,” he said.