DERA ISMAIL KHAN (92 News) – The Counter Terrorism Department (CTD) Khyber Pakhtunkhwa has on Friday foiled a major terrorist bid in Dera Ismail Khan and arrested seven terrorists of a banned terrorist group. As per details, the CTD carried out a joint operation with Special Police Unit in Dera Ismail Khan’s Jhok Nadu area and arrested seven-member group of a banned terrorist organization. Five kilogram explosive material, detonators and pistols were also recovered from them. The arrested men were identified as Hasnain Muawia, Abu Bakar, Muhammad Tahir, Muhammad Junaid, Muhammad Shoaib, Muhammad Kaleem and Muhammad Ajmal who belong to DI Khan. According to CTD, the banned outfit operatives were planning to carry out terrorist activity in in the city. The arrested men were shifted to undisclosed location for further interrogation. 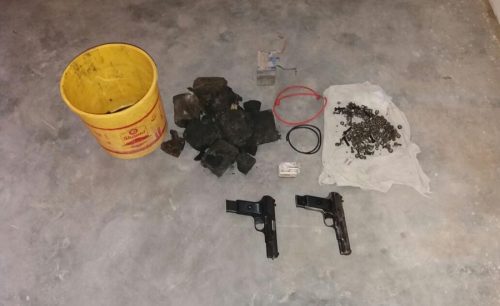