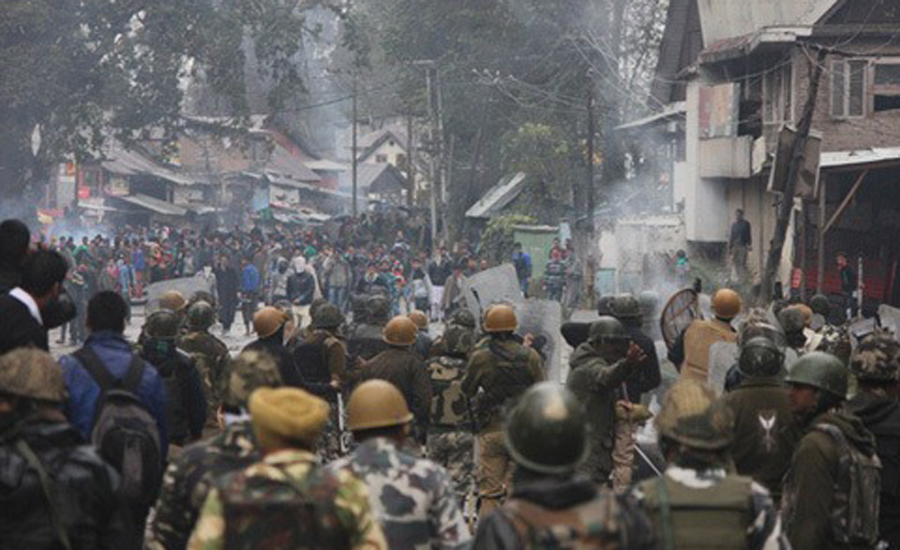 SRINAGAR (KMS) – In Occupied Kashmir, people overwhelmingly boycotted the fourth phase of the Indian parliamentary elections as 90 per cent voters stayed away from the polling process. Not a single vote was cast on 62 polling booths. The polling began at 7am and ended at 4pm for the second phase of the three-phase elections for Islamabad Lok Sabha seat. Less than two percent votes were cast in Devsar, Kulgam and Homeshalibugh areas of the district. The polling was marked by complete shutdown in the entire poll-bound Kulgam district. Call for the boycott and strike was given by the Joint Resistance Leadership. Meanwhile, Hurriyat leader and the Chairman of Jammu and Kashmir Employees Movement, Muhammad Shafi Lone, in a statement in Srinagar, said that the people of Occupied Kashmir had once again rejected the Indian election drama and stayed away from the poll process. He said that the people of Kashmir had been struggling for securing their birthright to self-determination and would continue their struggle till complete success.

No one voted in 60 villages in Occupied Kashmir

No one voted in at least 60 villages in the poll bound areas of Kulgam district during the fourth phase of sham Indian parliamentary elections on Islamabad’s Lok Sabha seat. Among these 60 villages some include Katipora, Kanjikul in Frisal area; Munand Gufan, RedwaniPayeen, RedwaniBala, HawooraMishpora, Ghat, Kujar, Tuli-Nowpora, Rampora in Qaimoh area of Homshalibugh. Similarly, Davev, Bogund, Bolsoo, Bogam, Bochroo, Supat, Panev, Desan, Hangalgush, Kukargund and dozens of other villages did not see anyone turning out at polling booths. On Monday, as the polling started in Kulgam district, groups of young men assembled in some villages, keenly monitoring who would turn towards polling stations set up inside government-run schools. Interestingly, army soldiers, paramilitary forces and police personnel were alert guarding polling stations just a few hundred meters away.