LAHORE (92 News) – 92 News has resolved the issue of Turkish First Lady’s missing necklace, maintaining its tradition of investigative journalism. In 92 News’ Programme ‘Hum Daikhain Gaay’, former prime minister Syed Yousuf Raza Gilani presented the lost necklace. He clarified that the necklace was not with him, but it was with a member of his personal staff. He said that he wished the necklace should be presented to Prime Minister Nawaz Sharif and Interior Minister Ch Nisar who should submit it to the exchequer. “Political revenge has been taken from me over the necklace issue. The government also told the wrong price of the necklace,” he said. 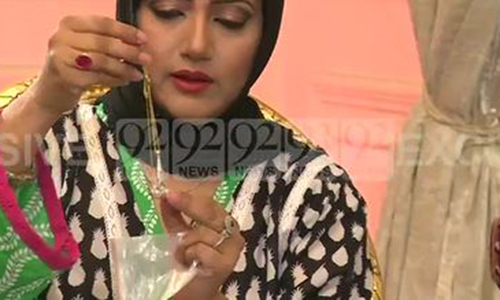 Former prime minister Syed Yousuf Raza Gilani said that Asif Zardari had not taken him into confidence before issuing a statement against the army. He revealed that Bilawal Bhutto had told that he would spend Ramazan in Punjab, but he suddenly left for abroad.