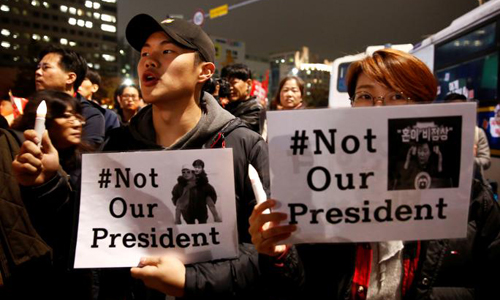 SEOUL- South Korea's opposition People's Party will start collecting signatures for an impeachment motion against President Park Geun-hye, while the main opposition Democratic Party will review the conditions for impeachment, party spokesmen said on Monday. South Korean prosecutors said on Sunday they believe Park was an accomplice in an influence-peddling scandal that has rocked her administration. Park's close friend Choi Soon-sil and former presidential aide An Chong-bum have been charged with abuse of power by pressuring companies to contribute funds to foundations at the center of the scandal. Hundreds of thousands of people took to the streets of Seoul on Saturday in the fourth straight weekend of protests against Park, in the biggest public demonstrations the country has seen since the 1980s. Park, who's five-year term ends in February 2018, has resisted calls to resign but has apologized twice, saying she only sought to benefit the economy not herself, but acknowledges carelessness in her ties with Choi. The People's Party, with 38 seats in the single-chamber 300-member parliament, has started efforts to remove Park from office and will talk with other parties to get signatures for an impeachment motion, said a party spokesman Lee Yong-ho. An impeachment motion requires at least half of the parliament to start and needs a two-thirds majority to pass. If an impeachment motion passes parliament, it is reviewed by the Constitutional Court, which has to confirm it with at least six of its nine judges. Political analysts say an impeachment motion against Park has a good chance of passing. The Democratic Party, which has 121 seats, said on Monday it would start reviewing the conditions for impeachment proceedings but did not commit to starting the motion. Impeachment proceedings need perfect preparations as much is possible, Choo Mi-ae, head of the Democratic Party told a party meeting, adding the best scenario was for Park to step down. Political analysts have said opposition parties are not pushing hard for impeachment because if the motion fails, it will improve Park's chances of surviving the crisis. In 2004, parliament voted to impeach then-President Roh Moo-hyun, only to have the motion overturned by the Constitutional Court. The move was unpopular with the public, which saw it as an abuse of power by the opposition, which had a majority then. -Reuters