A century after WW1, the search for a soldier's identity 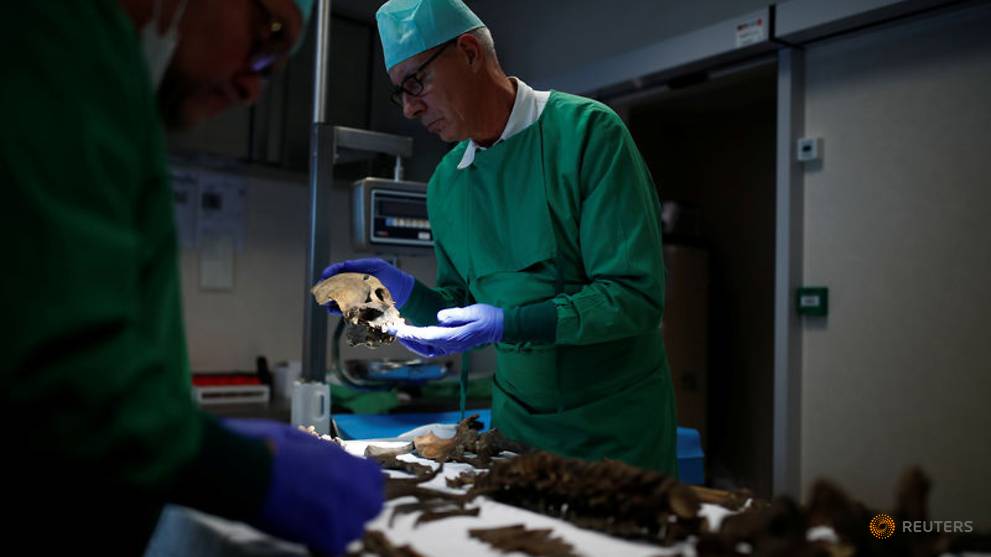 A century after WW1, the search for a soldier's identity

VERDUN, France (Reuters) - In a hospital mortuary in eastern France, the forensic doctor Bruno Fremont examines a gaping hole in the skull of a soldier killed by shrapnel a century ago, at the Battle of Verdun during World War One. Laid out on a white sheet are the combatant’s near-complete skeleton, many of the bones blackened, and his leather boots, the laces tied tight. What’s missing is the soldier’s ID tag. For months, Fremont has searched for clues as to the identity of the soldier, whose remains were found in March by workmen resurfacing a road. He has all but lost hope. A DNA test is useless without a known relative to compare against. “A tag is the only item that would have allowed us to formally identify him,” said Fremont, acknowledging the sadness and frustration of not being able to make an identification. “The boots are those that were on his feet when he died, and they are French army boots. But they’re not proof of his nationality. On his left side he carried a wallet that contained two French coins. And we found a gas mask near his skull, a French-issued M2 gas mask. “So in all likelihood he was French. But we cannot be wholly certain.” A century after the end of the war, President Emmanuel Macron will lead commemorations to mark the anniversary this weekend. World leaders will attend, including U.S. President Donald Trump and German Chancellor Angela Merkel. But even as the world marks the passage of so much time since the conflict, the tumult it caused continues to affect families whose relatives never returned from the battlefields. The Battle of Verdun, fought between French and German troops for much of 1916, was the longest and among the deadliest of World War One. Altogether, almost 300,000 soldiers were killed. Even now the ground continues to give up the fallen. On Tuesday, Macron lit a flame at the Douaumont Ossuary, a memorial containing the remains of soldiers who died at Verdun and where Fremont’s skeleton will be interred if it cannot be identified.

Verdun did not spare Fremont’s family. His grandfather was wounded in the fighting. As a child he would scour the forests that now cover the battlefield and collect bullet casings and soldiers’ helmets. Nowadays, when remains are found, Fremont is tasked by the local prosecutor with ascertaining if the bones are human and whether they date from the war. After all, he says, a serial killer called “the Ogre of the Ardennes” once lived in Verdun. The bodies of 80,000 soldiers were never recovered from Verdun. They lie buried in an area known as the “red zone”. More often than not, Fremont said, it is only fragments of bone that are found, from bodies ripped apart by shells. On rare occasions, Fremont finds his holy grail: a soldier’s identification tag. In 2015, workers renovating a Verdun war memorial unearthed three skeletons. After hours of searching, a tag was found - but there was no guarantee it belonged to the remains. The tag bore the name Claude Fournier as well as the date and town where he registered with the army: Macon. The discovery lead Fremont on an impassioned search for a living relative of Fournier and a DNA match. Two years later he found one: Fournier’s grandson Robert Allard, who was living in Cannes. “It was so emotional,” Allard said. “It had been my mother’s greatest regret in life that she never knew where her father died.” It was the first and only time the remains of an unknown French soldier from the Great War have been identified by DNA. The memory brings a tear to Fremont’s eyes. Yet it also compounds the disappointment of being unable to put a name to the delicate skeleton before him. “It’s frustrating,” the doctor said. “Because perhaps somewhere there is a family hoping they will one day find their relative.”