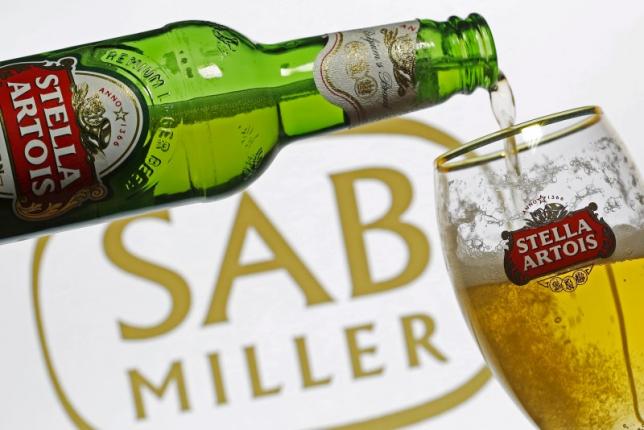 NEW YORK - Anheuser-Busch InBev and SABMiller received approval for their $107 billion (80.69 billion pounds) merger from US antitrust regulators on Wednesday after the companies agreed to unload beer assets and preserve competition from independent craft brewers. The Department of Justice approval comes with a number of stipulations and is notable after the regulatory authority derailed several recent mega-mergers over antitrust concerns. The Belgian brewer will make concessions beyond its publicly stated offer to sell it stake in MillerCoors, its US joint venture with London-based SAB, as part of the deal. AB InBev will also have to curb its use of incentive programs to limit competition. Reuters previously reported that the DOJ was investigating AB InBev's practice of financially rewarding beer distributors for selling more of its own beer than its competitors. Craft beer companies had vocally objected the practice, which they argued hurt their ability to sell. "Independent distributors that sell (AB InBev’s) beer will have the freedom to sell and promote the variety of beers that many Americans drink," Deputy Assistant Attorney General Sonia Pfaffenroth of the Justice Department's Antitrust Division said. The world's top two brewers hold brands Budweiser, Stella Artois, Miller and Pilsner Urquell. "While we will make some adjustments to certain aspects of our US sales programs and policies, our fundamental approach and commitment to this market will not change," said AB InBev Chief Executive Officer Carlos Brito in a statement. AB InBev will also be required to secure the DOJ's approval before acquiring any beer distributors or craft beer brands. AB InBev has already acquired several regional craft beer companies, looking to benefit from a rapidly growing niche market in the slowing beer industry. Recent deals include Colorado-based Breckenridge Brewing, Oregon-based 10 Barrel Brewing and Virginia-based Devil’s Backbone Brewing Company. "The DOJ’s significant requirements... appear to address some of our major apprehensions with the merger. With effective enforcement of these provisions, small brewers can rely on their independent distributor partners to access the market," Bob Pease, president and chief executive officer of the Brewers Association, said in a statement on Wednesday. Terms of AB InBev's agreement with the DOJ expire in 10 years. AB InBev will also divest the rights to all SABMiller beer brands currently imported or licensed for sale in the United States. Denver-based Molson Coors Brewing Co will buy SAB's 58 percent stake in their US joint venture, MillerCoors. Molson closed up 3 percent at $100.80 on Wednesday. The deal changes little within the US market, according to Adam Fleck, equity analyst with Morningstar in Chicago. Still, he added "There's a chance to increase the profitability for Molson Coors and MillerCoors enterprises that will make MillerCoors more competitive." Globally, the deal positions the combined companies to produce almost a third of the world's beer, dwarfing other major producers like Heineken and Carlsberg. InBev will have more breweries in Latin America and Asia and an entrance to Africa, as major markets such as the United States weaken due to craft beer popularity. Australia, Europe and South Africa have cleared the deal. The companies are waiting for China to approve it although a proposed sale of SABMiller's stake in CR Snow was expected to lead to clearance. AB InBev reaffirmed its plan to close the deal by the end of the year. Shares of the company rose earlier after the DOJ announcement but were down less than 1 percent at $112.95 in late trade in New York. SABMiller closed up less than 1 percent in London. -Reuters