De Villiers is the Neo of the cricketing world, says Steyn 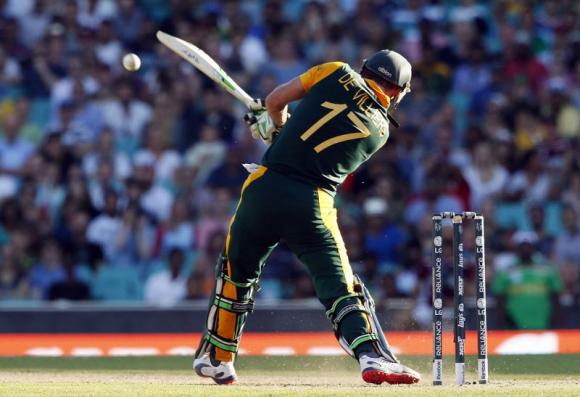 De Villiers is the Neo of the cricketing world, says Steyn

AUKLAND (Reuters) - South Africa captain AB de Villiers' batting blitzkriegs in the last two months have been so good that even his own team mates are in awe of them, fast bowler Dale Steyn said on Friday. De Villiers has scored 241 runs in four innings at the tournament, including a stunning 162 not out against West Indies from 66 balls. He has a strike rate of almost 162 and has the most sixes (11) and fours (22) in South Africa's vaunted lineup. Prior to the tournament, he belted a 31-ball century against West Indies, smashing the old record for the fastest ODI ton by five balls. "Oh, man, it's like watching 'The Matrix' movie, really," Steyn told reporters in Auckland on Friday, a day before his side face Pakistan in their Pool B clash at Eden Park. "There is Neo for you right there. He just doesn't understand how good he is. "I think he's actually figured out now ... there is no roof or cap on how good he can possibly be. "He's one of those players that's proven in this year especially just how good he is. I think he's starting to realise that now. "Bowlers are struggling to find a way to get this guy out. The only way to get him out is when he gets himself out." Steyn felt sorry for some of his fellow bowlers having to face his captain, though he said if he had to bowl to de Villiers he had a cunning plan that may work. "I'd trip him on his way out of the hotel ... and hope that he breaks his ankle," Steyn said while laughing. "He's a phenomenal player and seeing the ball like no other player is seeing a cricket ball before, and he's playing shots that I don't think most people have seen before. "Hopefully he comes out and executes those same skills tomorrow and going forward in this competition." While Steyn had played against Ireland in Canberra on Tuesday, he said he had been distracted for much of the week with bushfires in Cape Town threatening to engulf his home. He received about 80 messages and 30 missed calls one night from friends looking after his house, who relayed they had been given five minutes to pack what they could carry and get out. "I've never been more scared in my life," he said. "I'm sitting halfway across the world, and everything that I've ever earned or gotten in my life ...is in that house. "It's a pretty tough time back home right now."