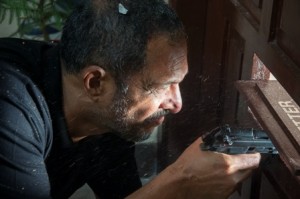 MUMBAI (Reuters) - Shimit Amin’s “Ab Tak Chhappan” (“56 So Far”) was a slick film about an encounter cop with a heart of gold. Aejaz Gulab’s sequel to the 2004 police drama takes away all the good qualities but retains the film-making style of the original film’s producer Ram Gopal Varma – streaky shots, contorted camera angles, and ear-shattering background music. “Ab Tak Chhappan 2” picks up where the earlier one left off. Encounter specialist Sadhu Agashe (Nana Patekar) is wooed back by the same people who ousted him unceremoniously from the police force. Called upon to clear the “shishteem” (which is how everyone in this film pronounces “system”), Agashe hits the ground running, killing and shooting assorted “underworld” gangsters within days of rejoining the force. He follows no method in who he chooses to kill, or how he operates. His phone rings, someone on the other end informs him that there is a “teep” (tip) about a gangster, and Agashe rushes with his team, often firing bullets in crowded streets, on public beaches and in crowded gatherings, with no regard for public safety or protocol. Cinematographer Siddharth More’s bizarre camera-work is reminiscent of Varma’s recent works – shots which are too bright, cameras placed on sweet boxes and between characters’ legs etc. The dialogue is stilted, the characters are all caricaturish (the honest cop, the corrupt cop, the aggressive reporter), and the events unfolding on screen are not believable. The Mumbai gangster genre seems redundant because the real gangsters have either fled the city or are in jail. They aren’t going around killing police officers and their families. Nana Patekar seems to realise the futility of this film, and his indifferent acting is ample proof. Perhaps the film-makers should have realised it too.