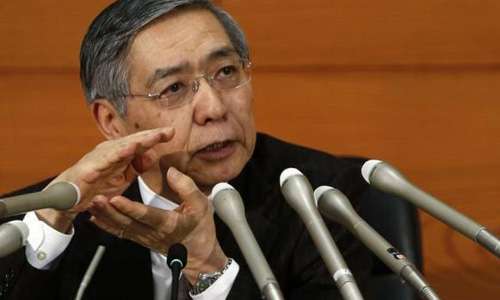 TOKYO - A rift is emerging between Prime Minister Shinzo Abe and his hand-picked central bank boss on how to fix Japan's tattered finances, which could blunt the impact of the "Abenomics" stimulus policies they have worked together to prosecute. Two years into Bank of Japan Governor Haruhiko Kuroda's tenure, the cracks are becoming hard to conceal and could affect the timing of any further monetary easing and an eventual end to the massive money-printing program he set in train. Their differences over fiscal policy needed to cut Japan's staggering public debt, which at 230 percent of GDP is twice the U.S. figure and about 50 points higher than perilous Greece, have so far been masked by their shared determination to end deflation. The perception of common purpose is critical to giving businesses, markets and consumers the confidence to change behavior and ensure that the stimulus measures and inflation targets are effective. But the mask began to slip last year when Abe decided to delay a sales tax hike, making Japan's primary fiscal goal harder to achieve. "The honeymoon days are over," said Izuru Kato, chief economist at Totan Research. "Kuroda must be frustrated over a lack of progress in structural reform and fiscal consolidation." A former finance ministry bureaucrat, Kuroda feels Japan cannot afford to delay tax hikes and spending cuts given its dire fiscal state, while Abe prefers to focus more on boosting growth to raise tax revenues. Last month a key policy panel run by Abe's right-hand man, Economics Minister Akira Amari, began debating proposals that could water down Japan's fiscal target of returning to a primary budget surplus, excluding debt servicing costs and income from bond sales, in fiscal 2020. Abe has not resiled from that target, but the panel is laying the ground for him to add other goals that give him more wiggle-room on spending, government officials say. BREACH OF ETIQUETTE His favorite idea, floated at the panel, is to add a goal on the ratio of debt to GDP. This ratio falls without deep spending cuts, as long as the BOJ maintains both low interest rates and solid economic growth with its massive stimulus. Defying central bank etiquette, Kuroda spoke against the proposals at a panel meeting on Feb. 12 in front of Abe. He returned to the theme two weeks later, despite raised eyebrows in government. "Achieving the primary balance target is just a first step. Only through this would Japan think about gradually reducing the debt-to-GDP ratio," he told reporters. Behind his concern is that Japan's huge public debt could lead to cuts in its sovereign debt ratings, which in turn would hurt Japanese banks with huge bond holdings. Delays in fiscal reform are also likely to leave the BOJ with a bloated balance sheet, already equal to 60 percent of GDP, for longer than it wants. Government officials admit they are counting on the BOJ to keep borrowing costs low for as long as possible, even if that means delaying an exit from the radical stimulus measures that have led to that unwieldy balance sheet. "The BOJ's stimulus is crucial in keeping borrowing costs low, which is a prerequisite for fiscal reform to proceed," one government official said on condition of anonymity. "There's no doubt it has become very hard for the BOJ to end its quantitative easing program" during Kuroda's five-year term ending in April 2018, a ruling party official said. CONFRONTATION COMING? Kuroda earned political capital by giving Abe what he wanted with an intense burst of stimulus in April 2013, which boosted corporate profits and improved consumer sentiment. But the relationship soured when he expanded stimulus in October to pace up inflation without advance consultation with the administration, say sources familiar with the deliberations. The move raised suspicion among Abe's aides that Kuroda was teaming with the finance ministry to nudge a wary premier into proceeding with the scheduled second sales tax hike in 2015. Weeks later, Abe decided to postpone the tax hike despite repeated calls from Kuroda to go ahead with the plan. Kuroda has continued to push for fiscal reform, and people close to him say the governor won't shy from expressing his displeasure at attempts to loosen fiscal discipline. This suggests political considerations won't influence the timing of future easing as much as markets suspect, say former and incumbent policy-makers close to Kuroda. The real test will come if and when the BOJ succeeds in hitting its inflation target, which would lead to higher long-term interest rates, says Kato of Totan Research, a veteran BOJ watcher. "That's the moment when the government piles pressure to keep rates low, making it difficult for the BOJ to end quantitative easing," he said. "The true confrontation has yet to come." - REUTERS