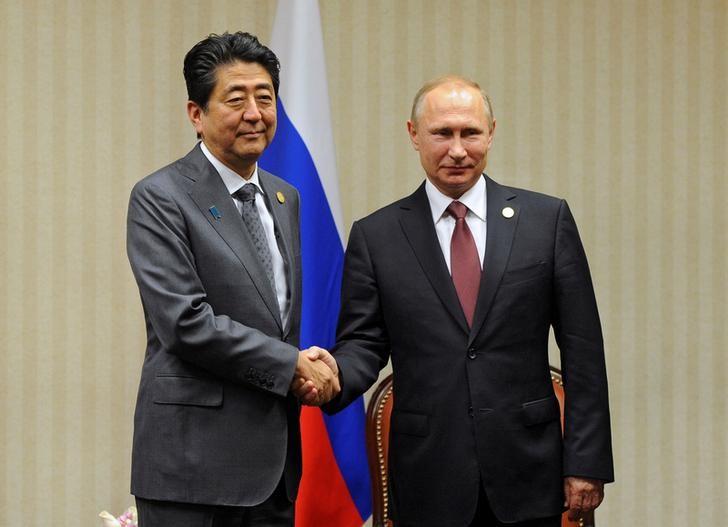 TOKYO - Japan and Russia look set to improve ties and clinch some business deals when their leaders meet next week, but both sides are scaling back expectations of a big breakthrough in a territorial row that has blocked a peace treaty to formally end World War Two. Prime Minister Shinzo Abe, who pledged in September to "resolve the territorial issue", wants to leave a diplomatic legacy by breaking the impasse with Russia, a strategy he hopes would help Tokyo counter a rising China. Territorial concessions would be risky for Russian President Vladimir Putin but the business agreements Tokyo is dangling would be welcome for an economy hit by low oil prices and Western sanctions. But Abe said this week while he hoped for progress, the matter couldn't be solved in one meeting. Russian officials have echoed the cautionary tone. "We should not raise expectations. It will be enough if one fresh step toward the resolution of the territorial issue will have been taken," Muneo Suzuki, a lawmaker long involved in Japan-Russia ties and now advising Abe, told Reuters. "I think that one step can be taken." The territorial feud stems from the Soviet Union's seizure at the end of World War Two of four islands off Hokkaido, known in Japan as the Northern Territories and in Russia as the Southern Kuriles. Although ties between the two nations have improved since the end of the Cold War, there has been domestic opposition in both countries to compromising over the ownership of the islands, which remain under Russia's control. Abe and Putin meet on Dec. 15-16, first in Abe's constituency in southwest Japan and then in Tokyo the next day. The two sides are working to revive security talks and joint naval rescue training halted after Russia annexed Crimea in 2014, triggering Western sanctions. They also might agree to speed up talks on joint economic activity on the four islands, Japanese media said. "These are meager results after such high expectations," said James Brown, a professor at Temple University's Japan campus. Diplomatic sources cite a variety of reasons for the dialing down of expectations in Tokyo, from the possibility U.S. President-elect Donald Trump will improve Washington's ties with Moscow and thus make Japan a less attractive partner to suggestions Abe put too much trust in his personal ties with Putin, whom he has met 15 times during his two terms as premier. "TWO-PLUS-ALPHA" Japan long insisted its sovereignty of all four islands be confirmed before a peace treaty is signed. But there are signs it has been rethinking its stance, reviving a formula called "two-plus-alpha", based partly on a 1956 joint declaration in which the Soviet Union agreed it would hand over two smaller islands after a peace treaty was signed. "It would be good if they can say concrete negotiations will be launched based on the 1956 Japan-Soviet joint declaration to achieve a resolution," Suzuki said. Agreeing on a peace treaty after the transfer of just two islands, however, would leave Abe open to criticism from his conservative base, hence the search for something extra. One previously floated idea is creating a framework for joint economic activities on the islands. Russian Foreign Minister Sergei Lavrov told reporters last week discussions on the topic were underway at Abe's suggestion. Japan, however, insists any joint economic activities should be carried out without infringing on Japan's sovereignty claims, a stance that makes sorting out a legal framework tough. Any agreement involving transfer of sovereignty to Japan would have to address whether the U.S.-Japan security treaty, the core of Japan's diplomacy, would apply - including whether Washington would have the right to put military bases there or be obligated to defend the isles. Providing such assurances, however, risks weakening Washington's commitment to defending tiny Japanese-controlled islands in the East China Sea also claimed by Beijing. "It will be difficult for the prime minister to overcome all hurdles on Dec. 15-16," Masashi Adachi, head of the ruling Liberal Democratic Party's foreign policy panel, told Reuters. "There are aspects where expectations were too high. I think they are becoming cautious." -Reuters