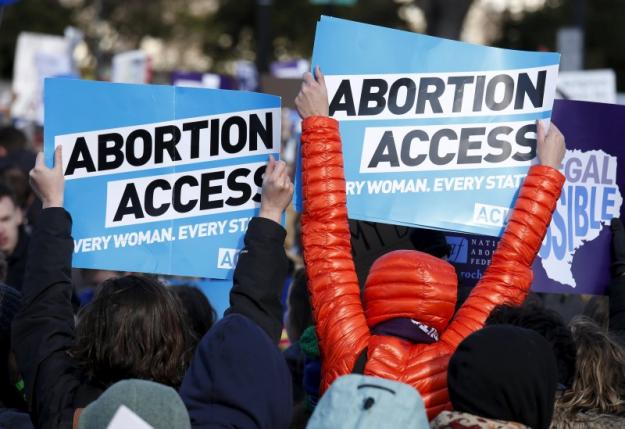 WASHINGTON - As she waits for the US Supreme Court to rule on a challenge to a restrictive Texas abortion law, Amy Hagstrom-Miller said she hopes she will not have to close up to three of the clinics she operates in the state, but is planning for it just in case. Hagstrom-Miller founded Whole Woman's Health, which runs four facilities in Texas that provide abortions and led the legal challenge to the law. She said she has spreadsheets listing staffers who would be laid off if the court allows the law to survive, and is thinking about selling buildings and medical equipment as well as shutting her clinics in Fort Worth, San Antonio and McAllen. "I would be irresponsible if I didn't plan," Hagstrom-Miller said in an interview. The Supreme Court is due to rule by the end of June on whether the Texas law, which imposes strict regulations on abortion doctors and clinic facilities, violates a woman's constitutional right to end her pregnancy as set out in the landmark 1973 Roe v. Wade ruling. The court has not issued a major abortion-related ruling since 2007. The law requires abortion doctors to have "admitting privileges," a type of formal affiliation, at a hospital within 30 miles (48 km) of the clinic. That provision has been implemented. A second provision, not yet in effect, requires clinics to have costly hospital-grade facilities including extensive standards for such attributes as corridor width, room size, floor tiles and the swinging motion of doors. Supporters of the law, passed by a Republican-led legislature and signed by a Republican governor in 2013, say it was enacted to protect women's health. Abortion rights advocates say it imposes medically unnecessary regulations intended to shut clinics and has dramatically reduced access to abortion in Texas, the second-most-populous US state with about 27 million people. Getting a clear-cut ruling is complicated by the fact that the court is down to eight justices, split evenly with four conservatives and four liberals, following the February death of conservative Antonin Scalia. One possibility is a 4-4 split that would affirm a lower court's decision upholding the law but would not set a national legal precedent that could guide other states eager to pass similar statutes. Because it is unlikely one of the court's liberals would join the four conservatives, there is almost no chance of a broad ruling upholding the law and giving other states a green light to enact similar measures. Numerous Republican-governed states have considered measures that would restrict abortion availability. 'NOT A CATASTROPHE' For abortion opponents, who no longer have Scalia to cast a fifth vote to tip the balance in their favor, a 4-4 split leaving the Texas law in place may be the best result possible. John Eastman, a professor at Chapman University School of Law in California, an abortion opponent who filed a brief with the high court backing the Texas law, said if the justices cannot deliver a decisive ruling, "It's not a catastrophe." "I'd rather have women's health and safety in some parts of the country than no parts of the country," Eastman said. Legal fights over similar laws are ongoing in several states, including Mississippi, Louisiana and Wisconsin. If the court leaves in place the lower-court ruling upholding the Texas law, the number of abortion clinics in the state would drop from the current 19 to nine, abortion providers said. Texas had 41 abortion clinics when the law was passed. "A 4-4 decision would leave us in the untenable situation where a woman's ability to get an abortion will depend on where she lives," said Jennifer Dalven, a lawyer with the American Civil Liberties Union, which opposes restrictive abortion laws. Another possibility is that the justices strike down the law, or invalidate one of the two provisions at issue while keeping the other. It may be more likely that the admitting-privileges provision, already in effect, would survive, while the hospital-grade facilities requirements, which the justices themselves temporarily blocked, would not. Justice Anthony Kennedy could be the key player in any such scenarios, which would require at least one conservative to join the four liberals. Kennedy is a conservative who in past rulings has endorsed Roe v. Wade, but has voted to uphold some abortion restrictions. "It comes down to Justice Kennedy, and during the argument he didn’t show his hand too much," said John Seago, the anti-abortion group Texas Right to Life's legislative director, adding that the ruling could give abortion opponents "ideas about what laws we could pass." Another possibility is that the court returns the case to a lower court for further proceedings, as Kennedy suggested during March 2 oral arguments. "It's overwhelming for me when I think what could happen if it's not a favorable decision," said Dr. Bhavik Kumar, who performs abortions at two Texas Whole Woman's Health clinics. "I try not to think about it every minute of every day." -Reuters