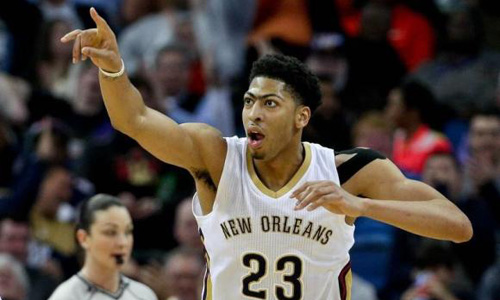 LOS ANGELES - Anthony Davis has been anointed the next great superstar of the National Basketball Association but injuries keep his reign a future promise instead of a present fulfillment. Davis, 22, is a transcendent talent whose skills defy his power forward position. But the only thing growing faster than his list of credentials is his medical report. The New Orleans Pelicans third-year player has already been sidelined for a total of 47 games in his young career, and his absence teases the NBA of its most unique standout. "Since I've been here we've been dealing with injuries," Davis told Reuters following the Pelicans' loss on Sunday to the Los Angeles Clippers. "Guys are going are going to get hurt. That's the NBA, you have to deal with adversity and still find a way to win." Davis returned Sunday from his latest two-game absence due to a rolled ankle and again showed why he is such an appetizing player. He moves the floor like a 6-foot-10 gazelle and scores seamlessly from inside or out. Already a two-time All Star, Davis has taken another leap forward this season with averages of 24.6 points, 10.4 rebounds and a league-leading 2.9 blocks per game. Davis also tops the NBA in Player Efficiency Rating, which measures a collection of stats and a player's overall value to his team. That makes it all the more disheartening for the league and the Pelicans that he has occasionally been a no-show. New Orleans (37-33) is flirting with their first playoff berth since 2011 but they have fallen three games behind Oklahoma City for the final Western Conference spot as their group has been devastated by team-wide injuries. "Our top guys have been out a lot of the time throughout the season. It's been tough," said Pelicans guard Eric Gordon. It's taking a toll. When we're all healthy it makes the game a lot easier." The game would undoubtedly be easier for Davis if not for separate ailments this season to his chest, toe, groin, shoulder and ankle. His injury woes may be emblematic of a bigger issue for the NBA which, this year alone, has seen extended absences from league faces LeBron James, Kevin Durant, Blake Griffin, Kobe Bryant and Carmelo Anthony. But no player has a brighter future than Davis who is awaiting the day his health and potential finally come together like his signature unibrow. - REUTERS