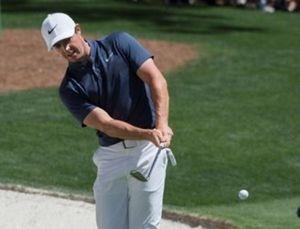 AUGUSTA - Rory McIlroy has grand slam ambitions in his sights at this week's Masters and he thrilled the fans with a hole-in-one during practise at Augusta National on Monday. The Northern Irish world number three aced the par-three 16th with a seven-iron from 170 yards, sparking thunderous roars from the watching galleries. "I don't think I have ever heard a roar that large during a practise round," a smiling McIlroy told reporters after his dramatic shot earned him a 3&2 win over England's Chris Wood in a friendly match-play encounter. Aged just 26, McIlroy has already claimed four major titles and this week he will be bidding for his first Green Jacket at the picturesque 'Cathedral of Pines', to complete a career grand slam of golf's four blue riband events. Though he has not won a tournament this year, he came close with a tie for third at the WGC-Cadillac Championship last month and likes his progression at the Masters where he shared eighth place in 2014 before finishing a career-best fourth last year. "I feel like my game is in good shape," said McIlroy, adding that he loved to play competitive matches during practise rounds. "It gets me into a nice mindset ... so I'm going to try to do the same tomorrow, play 18 and have a match with someone. "That's the best way for me to prepare. It's competitive. You're trying to shoot a score." Asked to assess the condition this week of the heavily contoured layout at Augusta National, McIlroy replied: "Not very different at all to what we saw last year. "The way the course is now is probably like it played last year. a little soft and a bit slow. I am sure they are trying to get it faster and firmer as the week goes on." -Reuters