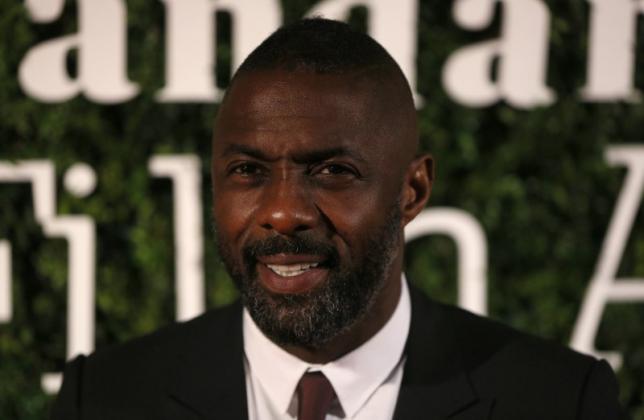 LOS ANGELES - British actor Idris Elba made a surprise appearance outside a London pub where street artist Jim Vision had created a giant graffiti mural featuring characters from Elba’s new movie, “Star Trek Beyond”. Elba, 43, climbed onto a scissor lift and was elevated to the top of the building where he added the finishing touches to the mural, spraying his signature underneath his "Star Trek" character, the villain Krall. Elba had found out moments before arriving that he had been nominated for an Emmy award for his performance in the TV series “Luther”. “Very good, I'm very excited, and congratulations to everyone else who's been nominated," he told Reuters. The London actor has long been considered one of the front-runners to be cast as the next James Bond. Earlier in the week, actor Matt Damon told Reuters that he would back Elba's casting as Bond. “He makes everything he's in better and he would make that franchise better," said Damon. "He's awesome." Elba said that he had seen the clip of Damon, and said it was “amazing.” “Listen, any compliment from Matt Damon is a very big compliment because he's an incredible actor, so thank you, Matt,” he said. In June, Elba was named as one of the members of the Academy of Motion Picture Arts and Sciences, which hands out the Oscars. Forty-one percent of invitees to the organization were people of color, following the “Oscars So White” controversy that dominated last years awards. Saying that he had yet to speak on it, Elba remarked that it was “a really nice moment.” “I think it's a very bold move for the academy to do that, and, of course, I'm a part of it, so that's great," Elba said. "Moving in the right direction, we love that." "Star Trek Beyond" will begin rolling out in cinemas worldwide starting on July 20. -Reuters