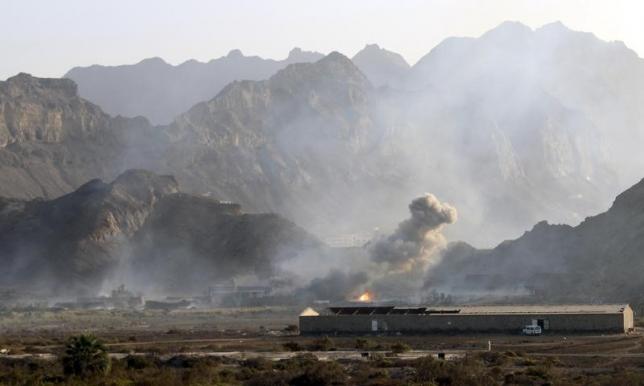 DUBAI - A week of bombing by a Saudi-led coalition has failed to force Yemen's Houthis to the negotiating table or rupture their alliance with a powerful ex-president, and the defiant militia could now claim the second city of Aden as its next prize. The fall of the southern port would be more than a symbolic blow to Riyadh: It would complicate Saudi efforts to persuade Yemeni tribal and army units to turn on the Iranian-allied Houthis. The operation by Saudi Arabia and other Sunni Muslim states aims to prevent the Houthis, who hold the capital, from winning control of the whole country and extending the regional influence of their main foreign ally, Shi'ite power Iran. The Houthis have momentum on the battlefield, in large part because of a tactical alliance with former president Ali Abdullah Saleh, who retains the loyalty of much of the army. Much may depend on Riyadh's ability to persuade tribes and Saleh army units to switch sides by playing on the fickleness of alliances in Yemen's factionalised politics. "There's still no country more influential in Yemen than Saudi Arabia," said Farea al-Muslimi, a Yemeni researcher at Carnegie Middle East Center. "Tribes and local officials have been receiving Saudi payments for years. If Saudi has an organised strategy and a desire to do so, it could activate these local connections to aid an internal reconciliation. There's no sign of that yet." Saleh himself has called for an end to the Saudi bombardment, pledging in return that neither he nor any member of his family would seek the presidency. But his appeals to Riyadh have, in public at least, fallen on deaf ears. To date, the Houthis remain defiant. BATTLEFIELD MOMENTUM The dominance of the Houthis and their allies on the ground could complicate the goal of coaxing Saleh loyalists to defect. John Jenkins, until last year British ambassador to Saudi Arabia, told Reuters: "If the Houthis were to take over Aden completely, they have Sanaa, Ibb, Taiz, Hodaida, Aden. That's pretty much the full set of cities. What do you do then? "My assumption is they (the Saudis) want to protect Aden and its government, because that then becomes the scene of the legitimate government, and they can then seek to detach Saleh from the Houthis," said Jenkins, now with the International Institute of Strategic Studies. "How do you bring the Houthis to the negotiating table? You have to push them back quite seriously I think. Have they suffered enough? It doesn't look like it." So far the campaign has involved air strikes on military bases, depriving the Houthis of warplanes and missiles, and naval bombardment of Houthi forces attacking Aden, the symbolic southern seat of Saudi-backed President Abd-Rabbu Mansour Hadi. Sunni-ruled Gulf states aim to use military pressure to push the Houthis to resume a U.N.-backed political transition led by Hadi interrupted by the group's seizure of Sanaa in September. Their takeover angered Riyadh, which sees the once obscure Zaydi Shi'ite group from the northern highlands as terrorists. GROUND INTERVENTION IN ADEN On Wednesday evening a unit of Houthi and army allies pushed into Aden's central Khor Maksar district, clashing with Hadi allies and sending rockets into the central Crater district. That is the closest the militia has come to taking the last main foothold of Hadi's supporters. The unit withdrew partially after coalition aircraft attacked it early on Thursday. But the threat to Aden remains. A big coalition priority, the city may be the first place the coalition introduces ground forces. "I think a coalition force will go into Aden and stay there to protect the legitimate government," said Saud al-Sarhan, a political analyst at the King Faisal Centre in Riyadh. "They don't want to destroy the whole Yemeni army, they don't want to do the same mistake as the Americans in Iraq. "They will try to convince troops loyal to Saleh to change their loyalty and be safe. They have to fight ISIL and al Qaeda, it doesn't benefit anyone to destroy it (the army)." A Gulf diplomatic official from a country allied to Riyadh said the coalition wanted tribal forces and army units to rise up against the Houthis. "Powerful tribes will be emboldened once the Houthis lose their air cover," he said. "The remnants of the Yemeni military will realise that backing Ali Abdullah Saleh was not smart." SALEH Houthi politburo member Mohammed al-Bukhaiti told Reuters the Saudis ultimately sought to split the Houthi alliance with Saleh and get Saleh to turn on the Houthis. He warned the Houthis would "end" Saleh if he tried to do so. While Houthi forces are battle hardened after many wars with the state in their northern bastions in the past decade, Saleh's military clout appears central to their success on the ground. "The main thing now is if Ali Abdullah Saleh forces stop fighting with them, I think they (the Houthis) will start to retreat," Yemeni foreign minister Reyad Yassin Abdulla told Reuters. Sarhan said many "semi-independent generals" were waiting on the sidelines to see who was winning. "Once they join the coalition, things will change very quickly." Carnegie's al-Muslimi said the Houthi-Saleh front remained united "but if this dynamic changes, it would have a huge impact on where the conflict goes." The prospect of a big ground incursion against the Houthis' northern strongholds remains remote, since Riyadh fears a quagmire battling Houthi forces on their home turf. But special operations forces might enter Yemen, gather intelligence and coordinate tribal allies, diplomats say "The Saudis need intelligence on the ground and they can get this by deploying special forces in Yemen or relying on Yemenis loyal to them,” said Ibrahim Sharqieh Frehat, conflict resolution analyst with the Brookings Doha Center. - Reuters