WASHINGTON (92 News) – Chief of Naval Staff (CNS) Admiral Zafar Mahmood Abbasi met United States Congresswoman Sheila Jackson in Washington. During the meeting, he discussed with her matters pertaining to mutual interests, bilateral defence ties and the security environment in Indian Ocean region. Admiral Abbasi is on an official visit to the USA to attend 23rd International Seapower Symposium-2018 being held from September 18-23. Besides the congresswoman, the naval chief met Acting Asia Pacific (DoD Policy) Randall Shriver, Center for New American Security President Richard Fontaine, Heritage Vice President Dr James Jay Carafano and Atlantic Council CEO Fredrick Kempe in separate meetings. During the meetings, the naval chief highlighted that Pakistan and US shared the common perspective of having stable, secure and peaceful maritime environment to support the global economy. He also highlighted the Pakistan’s commitment in the fight against terrorism particularly Pakistan Navy’s efforts for maintaining regional peace and security. The admiral stressed that the need for enhancing global efforts to effectively confront the trans-national challenges and threats in the maritime domain. The US dignitaries acknowledged the role and contribution of Pakistan for maintaining peace and stability in the maritime domain. Interactions and round-table discussions with the prominent US think tanks and academia were also held. During the discussion, while underscoring the challenges to Indian Ocean security, the admiral elaborated Pakistan’s initiative of Regional Maritime Security Patrol (RMSP) which is solely aimed to shoulder international obligations towards safe and secure maritime environment in the region. Earlier, Admiral Zafar Mahmood Abbasi met Pakistani Ambassador to US Ali Jehangir Siddiqui. A media interaction with Pakistani and international media personnel was also held. During the interaction, the naval chief highlighted Pakistan’s maritime perspective with a special focus on Pakistan Navy’s contributions to regional maritime security and opportunities offered by CPEC to the region. 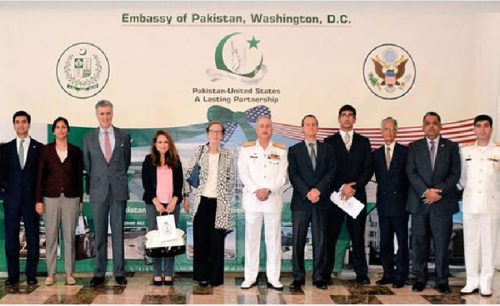 Addressing media personnel at the Pakistani embassy in Washington, Admiral Abbasi said that sea-based nuclear weapons deployed by India has forced Pakistan to take measures to ensure deterrence and maintain strategic stability paradigm. “Our eastern neighbour has introduced sea-based nuclear weapons, which is a major deviation and a major nuclear change between our two countries. So we think once you disturb this strategic stability paradigm, then there is an increased risk of war or conflict,” he said. He explained that Pakistan opted to ensure minimum deterrence to counter this. “Sea-based nuclear weapons provide assured second strike capability which disturbs the equation, so unless we equate that the imbalance might induce India to start a conventional war,” Abbasi said. In response to a question, the Naval chief denied that China was setting up a military base at Gwadar. “Absolutely no truth to that,” he said in reference to a Chinese base at Gwadar, adding that the Pakistan Navy will have “a big base there”. He explained that no foreign warship had entered the port and that if permitted, all foreign warships will be allowed to visit, including those from the UK, France and the US. Abbasi informed that Pakistan signed an agreement with China in 2016 for the purchase of eight submarines, half of which will be built in Pakistan. The submarine program is expected to reach maturity in 2025. To a question about India-US maritime agreements, Abbasi said that such agreements are not a “zero-sum game” so it does not imply the US will not hold maritime exercises with Pakistan. “Pakistan is going to hold multi-national maritime exercises in February next year, where some 50 navies from around the world, including the US and Chinese Navy will take part.” The naval chief urged the US to share intelligence regarding drug trafficking. To another question about Afghanistan, Abbasi said, “Pakistan’s policy towards Afghanistan remains the same, which is that it wants peace and stability. We don’t want large tracts of territory inside Afghanistan, which are ungovernable outside the writ of the government.” “Pakistan actually faces a lot of threat from Afghanistan already, and thus trying to have a fence along the 2,300 kilometres border for $500 million, he added.