RAWALPINDI (92  News) – Afghanistan Chief of General Staff General Sher Muhammad Karimi called on Chief of Army Staff (COAS) General Raheel Sharif at General Headquarters (GHQ) on Friday. According to the Inter Services Public Relations (ISPR), General Sher Muhammad Karimi and General Raheel Sharif discussed security situation in the region, cooperation on Pakistan-Afghanistan border and Afghan soldiers training by the Pakistan Army. Both military leaders pledged to target terrorists on their respective sides, ensuring denial of space for terrorists. General Sher Muhammad Kareemi will be chief guest at the passing-out parade at PMA Kakul. He will also address the ceremony. Afghanistan Chief of General Staff was given the guard of honour on his arrival. Later, he laid a floral wreath and offered Fateha at Yadgar-e-Shuhada. 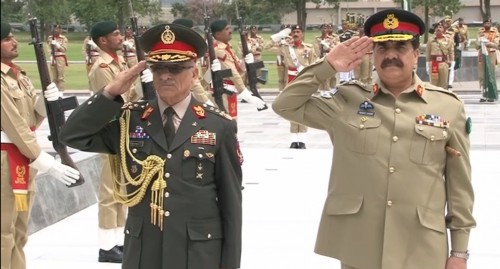