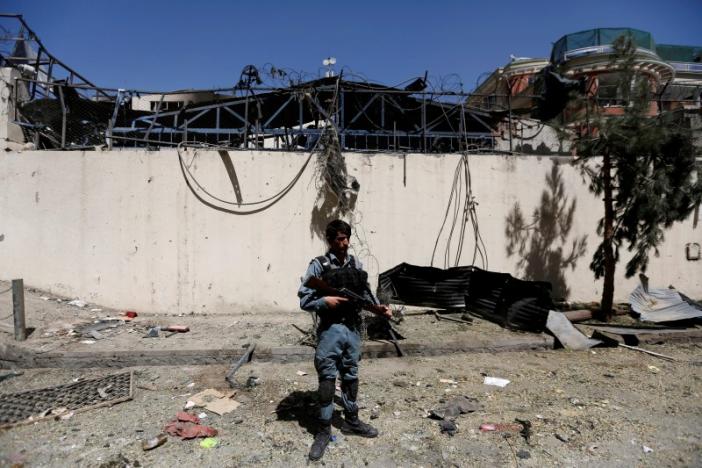 KABUL - Afghan security forces ended an 11-hour standoff in central Kabul on Tuesday, shooting dead the last of a group of attackers who struck hours after a separate suicide bombing killed and wounded dozens of security personnel and civilians. The bloody episode began on Monday afternoon with a twin suicide bombing in a busy area of the capital near the Defence Ministry that killed 35 people, including several senior security officers, and wounded 103. That attack was claimed by the Taliban and was followed a few hours later by a car bomb in Share Naw, a business and residential area of the city close to the government and embassy district. After the blast in Share Naw, three gunmen barricaded themselves in close to an office of aid group Care International and a government complex. The target of the attack was not clear. There was no immediate claim of responsibility for the Share Naw attack, which caused only six injuries. Care International said in a statement its staff in Kabul were safely evacuated. "When the explosion happened, all of our windows broke and for a minute I thought that the house had collapsed on us," said Togrul Big who lives near the Care International compound and suffered a hand injury in the car-bomb blast. Mid-morning on Tuesday, after hours of standoff interrupted occasionally by sporadic gunfire, Interior Ministry spokesman Sediq Sediqqi said Afghan special forces had killed all those involved in the attack. The violence highlighted the precarious security in the capital just a month before a conference in Brussels where international donors are expected to pledge continued financial support to Afghanistan. OFFICERS KILLED The Taliban's ability to conduct coordinated attacks in Kabul has piled pressure on the Western-backed government, which has struggled to reassure a war-weary population that it can guarantee security. The attacks came less than two weeks after gunmen attacked the American University in Kabul, killing 13 people. Many casualties in the defence ministry attack were caused when security forces personnel and civilians who rushed to help victims of an initial explosion were caught by a second blast minutes later. An army general and two senior police commanders were among the dead, a Defence Ministry official said. Another official said the deputy head of President Ashraf Ghani's personal protection force had also been killed. Afghanistan's foreign partners, concerned about the ability of the security forces to withstand Taliban violence, are expected to pledge support over coming years at the Brussels conference, three months after NATO members reaffirmed their commitment at a meeting in Warsaw. Outside Kabul, the insurgents have stepped up their military campaign, threatening towns including Lashkar Gah, capital of the strategic southern province of Helmand, as well as Kunduz, the northern city they briefly took last year. -Reuters