KABUL (Web Desk/Agencies) – The Afghan Taliban’s ruling council agreed to a temporary ceasefire in the war torn country, officials from the group told the US wire agency Associated Press (AP). However, the Afghan Taliban officials did not specify when the ceasefire would come into effect. According to the report, it is possible that the ceasefire will pave the way for a peace agreement between the US and the Afghan Taliban. A ceasefire was a key demand of the US as a precursor to the talks. AP reported that the agreement needs a final nod from the Afghan Taliban chief. However, officials told the news service that there would be no problems in getting the approval. The report did not mention the duration of the ceasefire but it has predicted that it will last for at least 10 days.  Taliban officials, who spoke to AP on the condition of anonymity, said that a "four-member negotiating team" agreed on the ceasefire after holding talks for a week. Washington is trying to secure a peace deal that would allow US President Donald Trump to end the longest war in the nation's history, a key promise he made during his election campaign. The conflict was launched 18 years ago in 2001 after the September 11 attacks by al-Qaeda .  Prior attempts by the Trump administration to secure an agreement had stalled, as the Taliban appeared unwilling to make commitments required by the US. According to report, a "key pillar" of the potential deal will be direct negotiations between the Taliban and the Afghan government to shape the future of the war torn country. Earlier, US Special Envoy for Afghanistan Zalmay Khalilzad met Foreign Minister Shah Mahmood Qureshi at Foreign Ministry during his one-day visit. During the meeting, they discussed the Afghan peace process as well as law and order situation in the region. 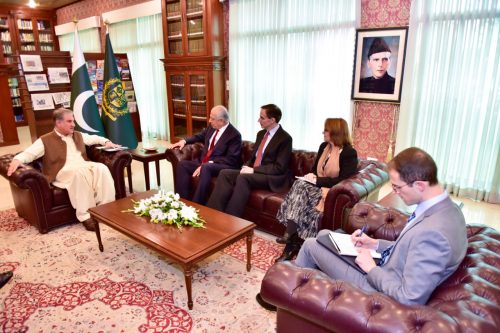 Shah Mahmood Qureshi said that Pakistan has been of the view since day one that use of force is no solution to the Afghan issue. “We hope that US-Taliban talks will resume soon. Regional peace and stability is linked to peace in Afghanistan,” he maintained. The minister said that Pakistan will continue to play its conciliatory role with good intent. US Special Envoy for Afghanistan Zalmay Khalilzad informed Shah Mahmood Qureshi about the US-Taliban talks at the delegation level. He lauded Pakistan’s conciliatory role for the establishment of peace in Afghanistan.