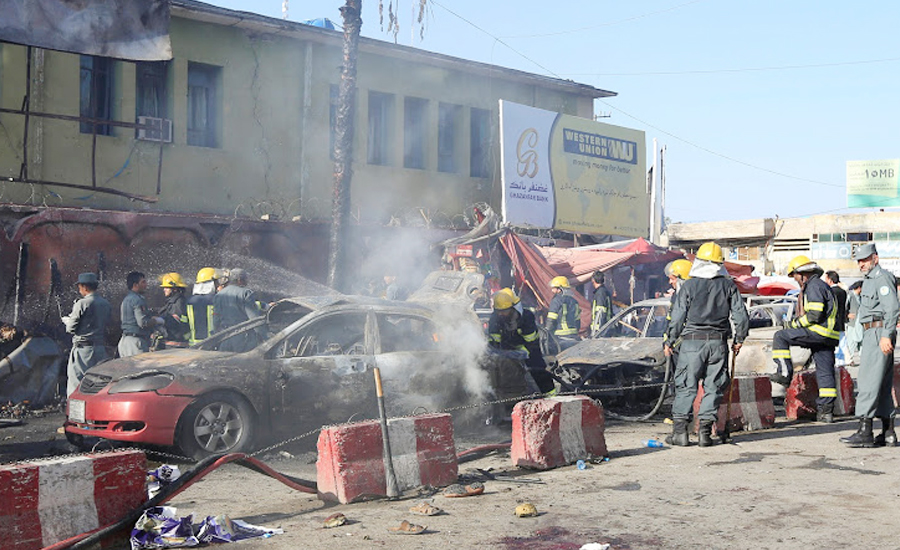 JALALABAD, Afghanistan (Reuters) - An explosion hit the center of the eastern Afghan city of Jalalabad on Sunday, killing at least 12 people and wounding 20 and sending a plume of smoke into the sky, witnesses and provincial government officials said. The blast, hours after President Ashraf Ghani had opened a hospital in Jalalabad, damaged shops and buildings around Mukhaberat square in the city, said governor’s spokesman Attaullah Khogyani. Ghulam Sanayi Stanekzai, police chief of Nangarhar said the explosion was caused by a suicide bomber who targeted a vehicle carrying members of the Sikh minority who were traveling to meet the president. “Most of the victims are Sikhs,” he said. The provincial governor’s Attaullah Khogyani the blast had killed at least 12 people and wounded 20. Officials said the casualty total might have been even higher had much of the city not been blocked off for Ghani’s visit. He was not in the area when the blast occurred. After the blast, the security forces immediately cordoned off the area as ambulances transferred the victims to hospital. There was no immediate claim of responsibility for the explosion, the latest to have struck Jalalabad. It is pertinent to mention here that this explosion happened just one day after Afghan President Ashraf Ghani announced a formal end to his government's ceasefire with the Taliban and ordered security forces to resume operations against the group.