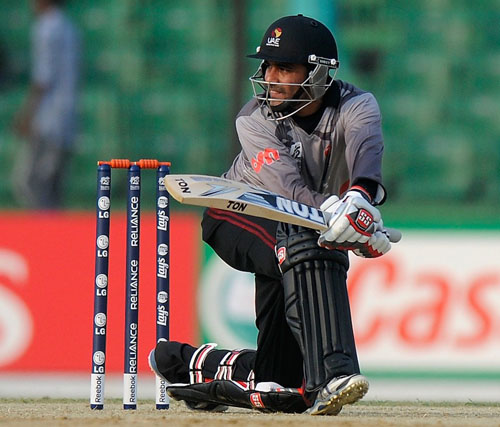 MELBOURNE, (AP) " Samiullah Shenwari top-scored with 58 runs and Najibullah Zadran added 47 as Afghanistan beat the United Arab Emirates by 14 runs in Friday's Cricket World Cup warmup match. Asghar Stanikzai, batting fourth, added 33 for the Afghan side as it reached 308-9. Right-arm medium pace man and all rounder Amjad Javed led the UAE bowlers with 4-39. In reply, Khurram Khan led the UAE with 86 and Krishna Chandran added 49 but the side was all out for 294 in the 49th over. Aftab Alam, whose three wickets included removing Khan lbw, helped stymie the UAE's late run chase. Afghanistan, competing in Pool A, plays its first World Cup match against Bangladesh in Canberra on Wednesday. The UAE, in Pool B, plays its first match Thursday against Zimbabwe in Nelson, New Zealand.